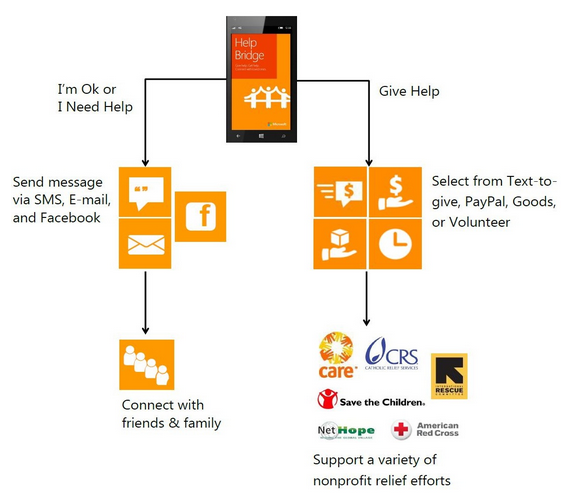 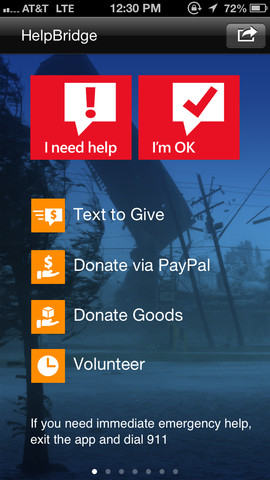 The next time a big disaster hits, Microsoft wants to help you connect with your loved ones.

To do that, the Redmond software giant just debuted HelpBridge, a new app that allows users to get in touch with friends and families during crisis. The app, available on Windows, Android, iOS devices, runs on the Windows Azure platform and lets you notify people via SMS, email or Facebook that you’re OK. Those messages include location information.

Users can preload a list of contact information for different people and easily let all of those people know they’re OK during an emergency.

The free app also makes it easy for users to donate volunteer time, money (via PayPal) and resources for relief and rebuilding efforts to organizations like American Red Cross, CARE and Global Giving.

According to Tony Surma, chief technology officer for Microsoft’s Disaster Response team, the idea for HelpBridge came about from Microsoft’s dedication to disaster response. Microsoft’s technology helped affected people in Haiti and Japan connect with family and friends during times of crisis. But those technologies were built on a case-by-case basis and quickly went away, so now HelpBridge is something that will always be available.

Previously on GeekWire: Geek of the Week: Microsoft’s new education leader makes an impact in Kenya