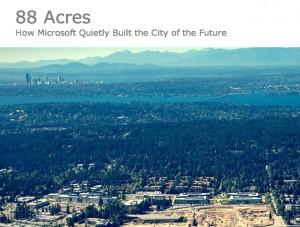 This interactive online story, 88 Acres, looks at first glance like it comes from a big independent news site — unfolding over multiple chapters, with graphics, video interviews and a character-driven storyline. The presentation style is reminiscent of Snow Fall, the epic feature published last year by the New York Times.

In fact, 88 Acres scored a direct link from Techmeme, the closely watched news site that tracks and aggregates key stories from across the tech industry.

But this story and the underlying technology were actually developed by Microsoft’s corporate communications team over the past two months.

88 Acres provides an inside look at the company’s effort to develop a “city of the future” — connecting buildings across the giant Redmond campus through a smart network that analyzes huge amounts of data to help reduce Microsoft’s energy usage and save the company millions of dollars a year. The title is a reference to the original size of the company’s headquarters campus, which now covers some 500 acres.

The piece is part of a broader effort by the company to tell its own stories in new and more compelling ways. In the age of Twitter, Facebook and quick-hit blog posts, this type of long-form communication goes against the grain and promises to get the attention of other companies looking for ways to deliver their messages with more impact.

And the similarities to the New York Times piece are not a coincidence.

“I think all of us sat back last year and saw John Branch’s piece Snow Fall and said, ‘That really is a high-water mark for how you can tell stories on the web,’ ” said Steve Clayton, the company’s “chief storyteller,” in an interview. “We were definitely inspired by what the New York Times had done.”

It’s an example of Microsoft’s effort to put itself more squarely in the middle of the tech industry’s conversations, from its perch in the Pacific Northwest. This manifests itself in a variety of ways, including Microsoft’s revamped News Center and Clayton’s Next at Microsoft blog. Frank Shaw, the company’s vice president of corporate communications, has also become quick to speak out with Microsoft’s perspective on breaking news events, as with this recent post about Facebook Home.

Microsoft’s 88 Acres piece is part of a movement called “content marketing” — corporate and organizational communications that go beyond run-of-the-mill advertising, tweets, posts and press releases, said journalism veteran Hanson Hosein, director of the Master of Communication in Digital Media program at the University of Washington and the author of “Storyteller Uprising.” Content marketing is one way for companies to rise above the chatter.

However, companies investing time and money in this approach must be careful to convey the value of the content early and clearly, Hosein said. Why should the reader pay attention? Why should people care?

So how did Microsoft do? Early references to big data and creating the “city of the future” grabbed his attention, Hosein said, but the piece lacked a truly “gee whiz” piece of multimedia. The first video, for example, is standard interview with b-roll. Also, Hosein said he nearly gave up after he initially couldn’t find how to advance to the next chapter, when viewing the piece on an iPad. (Microsoft has since addressed an initial navigational glitch at the bottom of the piece.)

Hosein said the most compelling visual, in his view, was the “Microsoft’s Smart Campus” graphic in the fourth chapter, because it clearly described what was compelling about the story.

“Ultimately, I think this was a fine effort by Microsoft, but could have had a more mainstream impact with strong multimedia assets, and frankly, more blood-pumping storytelling,” Hosein said. “I guess it really depends on who they were trying to reach with this. It’s perfectly fine for those who actually are interested in this particular subject, work for Microsoft, or live in Redmond.”

However, he added, the fact that the piece grabbed the attention of major news sites is also a point in Microsoft’s favor.

Microsoft’s Clayton said the presentation relies heavily on HTML5 and other web standards, aiming to make the site as accessible as possible across a variety of devices. The piece was written by Jennifer Warnick, a Microsoft writer. A variety of employees contributed content, including one who provided the aerial photography featured on the first page.

The company doesn’t plan to do this type of story every week, but now that the underlying technology platform has been developed, it can be used again periodically for other topics.

“We’re already thinking about the next set of stories,” Clayton said.