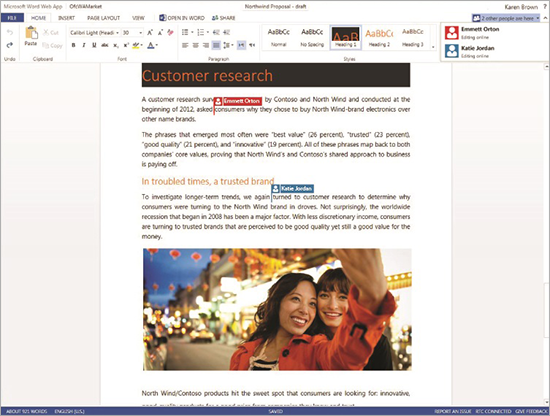 If you need to work with someone else on crafting the perfect PowerPoint presentation, Microsoft now makes that easy for you.

The company announced yesterday that its Office 365 web apps are gaining live collaboration tools, so that it’s possible to edit a document saved in SkyDrive with multiple other people all at once. Like many of the other cloud collaboration offerings out there, the web apps also now have auto-saving capabilities, so you don’t have to worry about losing data.

Live collaboration was one of the major features Microsoft’s offering has been missing, especially as Google Apps for Business and now Apple’s new iWork for iCloud both feature those capabilities.

As competition over the control of the productivity apps market heats up, Microsoft and Apple both seem to be racing towards a future where live collaboration won’t just be a feature of web apps, but also baked into the experience of using the native application versions of Office or iWork. The real question is: which company will get there first?

To use the new collaboration tools, go to skydrive.live.com.