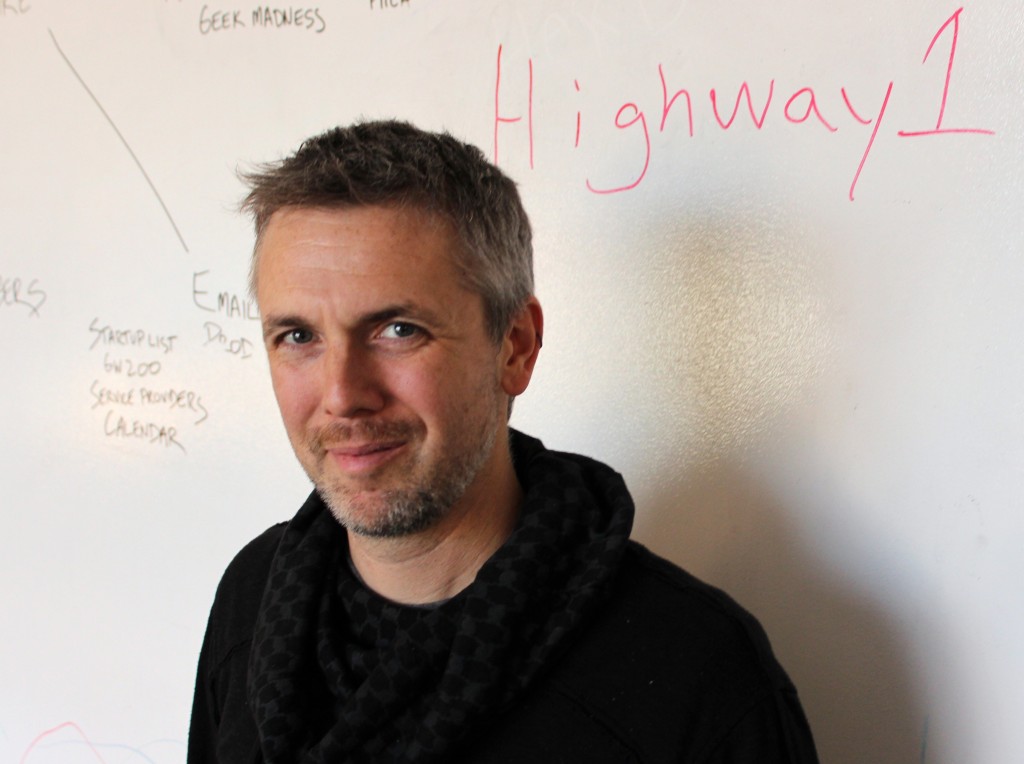 Brady Forrest has a unique perspective on the world of hardware these days as the leader of Highway1, a hardware startup incubator in San Francisco created by the product development and supply chain company PCH International.

Forrest, the former Seattle resident who was the co-founder of the popular Ignite event series, was back in town this week as part of his recruiting efforts for Highway1’s next class of companies. We sat down to catch up on the status of Highway1, and hear about what he’s learned so far in the role.

Eleven companies are participating in the incubator’s first class, which is now in its third month. They include seven consumer startups, two medical startups, one solar company and a robotics company. They come from a variety of places, including Europe, Asia, New York, the Bay Area, and Los Angeles.

One of the initial Highway1 companies, Birdi, maker of a smart air monitor, just launched on Indiegogo last week. Another company, Ringly, came out of stealth mode last week with a writeup in Fast Company.

The Highway1 companies spent two weeks in China in November getting factory tours and meeting with manufacturers, one of the benefits for companies taking part in the program. Highway1 offers the participating startups access to PCH’s manufacturing and hardware experts, and up to $20,000 in seed capital in exchange for 3 percent to 6 percent equity.

So what does it take for a startup to succeed in Highway1, and the hardware industry in general? Continue reading for edited excerpts from our conversation with Forrest earlier this week.

A lot of people are familiar with software and Internet startup incubators. How does a hardware incubator compare?

But then they have the additional problem of scaling. And scaling for them is not swiping a credit card with Amazon. Instead, they have to take their prototype that they’ve made and somehow turn that into something where people they’ve never met before can make tens or hopefully hundreds of thousands. It would be like what a software incubator would have been like before AWS. Hardware is not there yet. … That’s the next great company, to be able to be the AWS of hardware manufacturing, which PCH is aiming for. That’s the dream, and I think a lot of folks are aiming for that.

What advice would you give to a startup looking to get into the hardware business?

Forrest: First, your prototype is not your documentation. You can’t walk into a factory and say, “Here, I made this. Make it go.” It requires a rigor that is not something that you see everyday, and that people who’ve made a prototype with an Arduino board don’t necessarily understand.

The other thing I would say is, software matters. … It’s the software that defines the user experience, and you have to remember that.

You need broader teams. You know Dave McClure’s hacker, hustler, hipster? I love that. I’m going to add a “maker.” … When it comes to manufacturing you need an electrical engineer, a mechanical engineer, somebody who knows firmware, and you need industrial design. And those are different people with different skill sets, and they have to be deep.

Also, manufacturing informs the design. With a 3D printer, you can make magic happen, but that’s not scalable. So you need to make sure that, at the cost you’re trying to get to, and the speed you’re trying to produce, that you can actually make this thing.

Everything takes longer. When you’re iterating a project, it takes a week to get things fabbed. A week of handling and playing with the device, and a week of iterating. Whereas with software, it’s a couple lines of code, new text box, boom.

You’re accepting applications now for the second Highway 1 class. What will be different this time?

Should companies have some form of prototype if they apply?

Forrest: Well, I wouldn’t want to turn anyone away from applying, but they’re going to need a prototype to get into the program. And we’re not going to accept solo teams. There needs to be more than one. Hardware has too much going on. If someone’s a solo person, we’d gladly chat with them and get to know them, and maybe defer them to the next program.

How is the Seattle region’s tech community positioned to take advantage of this new wave of hardware innovation? Our strength seems to be primarily in software and the Internet.

Forrest: I think Seattle is absolutely positioned. Anyone can prototype. … And you’ve got Boeing people who know manufacturing. A lot of these things, like the Pebble, are extending the phone, with a new use case and design. You’ve got great programs here like the UW. Anyone can prototype — that’s the beauty of it.