Business is budding for Privateer Holdings Inc., a Seattle company that just reeled in $7 million in a series A round.

Privateer was founded three years ago by Brendan Kennedy, Michael Blue and Christian Groh specifically for the medical marijuana industry. Its flagship acquisition is Leafly, a unique review-site for medical marijuana patients to find the right strains and dispensaries to suit their medical and financial needs.

We wrote about the company last October, outlining its plans to professionalize a booming yet controversial industry with a crowdsourced review platform like Yelp and Consumer Reports, but instead for medical marijuana strains.

Things have been going well since then for Leafly, which makes most of its money through advertising packages to dispensaries and other companies that run anywhere from $195 per month to over $3,000 per month. They’ve just moved into new digs, have been on a hiring spree and are reaching nearly 2.5 million website hits per month. There’s even a Leafly storefront now with apparel and dispensary supplies, as well as an online cannabis industry news site in the works.

Pulling in cash is certainly one thing, among many others, that has changed dramatically since Leafly started in 2010. The attitudes of many potential investors did 180-degree turns once recreational marijuana was recently legalized in Washington and Colorado.

“A lot of people thought we were pretty crazy when we started,” Kennedy told us last month. “People sat on the fence and waited until November 6th. When they woke up November 7th, we seemed a lot less crazy. Now, we’ve spent a lot less time doing pitches and have been mostly waiting for investors to find us.” 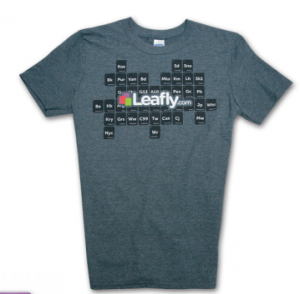 Those investors aren’t all pot-smoking, cannabis connoisseurs, either.

“If you put all of the investors in a room, they wouldn’t agree with each other on most political topics or even most social topics,” explained Kennedy, a Yale grad and former managing director at Silicon Valley Bank. “But they all are interested in ending the harm caused by prohibition.”

The founders, who recently added I-502 Outreach Director Tonia Winchester to the team, are looking at a list of about a dozen potential additional acquisitions around the country, from the online-world to product-focused and even the retail space.

Investors pitching in to this $7 million round include Michael Auerbach, a Senior Advisor to the global strategy firm Albright Stonebridge Group. Auerbach also became Privateer’s first board member. The other investors are individuals and small family offices.

Editor’s note: This story was updated with investor information at 11:40 A.M. on July 16.