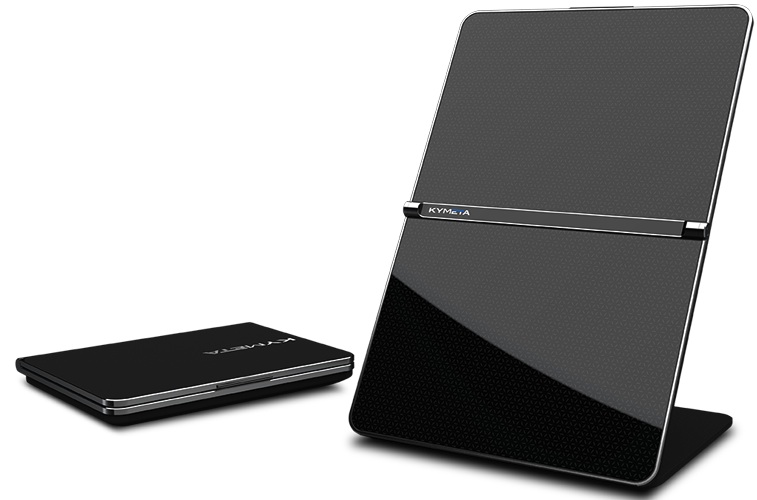 Kymeta, the wireless technology company spun out of Intellectual Ventures and backed by investors including Bill Gates, says it has achieved a milestone with a successful demonstration of its portable broadband antenna technology — establishing a two-way satellite Internet connection using a high-tech approach that can efficiently steer a beam to maintain a link without any moving parts.

The company says the demonstration clears the way for the commercialization of its technology, including plans for laptop-sized antennas (above) that will be able to establish a broadband connection anywhere in the world.

Kymeta’s technology, based on metamaterials, is also expected to improve broadband access on planes and other moving vehicles.

“This achievement is a tremendous milestone as we have now proven to the world that our metamaterials antenna technology works as predicted,” said Kymeta CEO Vern Fotheringham in an email to GeekWire. “When we look back at this achievement a decade from now, I think we will all remember it as the milestone that changed the history of the Internet to allow connectivity from anywhere in the world.”

He added, “I am pretty sure that one day our first prototype antennas will be on display in the Smithsonian showing the world how it all began.”

Fotheringham, a telecommunications industry veteran, has said in the past that Kymeta has the potential to become one of the Seattle region’s future billion-dollar public companies.

After spinning out of Nathan Myhrvold’s Intellectual Ventures last year with initial funding of $12 million, Kymeta announced an additional $50 million in funding this summer. In addition to Gates, who sits on the Kymeta board, investors in the company include Lux Capital, Osage University Partners, The Kresge Foundation and Liberty Global, the investment fund led by cable veteran John Malone.

The demonstration, conducted last week at the TeleSat teleport in Vancouver, B.C., had the basic goal of executing a simple ping to show the ability to transmit and receive a signal. Once that was accomplished, Kymeta showed the ability to stream video and pull up a website. Then they went for a stretch goal — using the satellite connection to make a Skype call via laptop from Vancouver to the rest of the team in Redmond.

There was “a huge celebration” back at Kymeta headquarters when the Skype call came through, said Håkan Olsson, the company’s senior director of marketing.

“Seeing our research and development efforts culminate in this successful bi-directional satellite connection is like a dream come true,” said Dr. Nathan Kundtz, founder and CTO of Kymeta, in a news release.

The company says it will have prototypes ready for field trials in 2014, and expects its first wave of commercial products ready for the market in 2015. The pricing of the portable antenna will initially be targeted to customers such as large media organizations, and oil and gas companies, with the cost dropping over time to accommodate a mass market.