In the grand scheme of the game they call baseball, a foul ball is meaningless. Batted balls that land outside the chalked white lines are deemed out of play and are not accounted for in the postgame box score.

On Monday evening at Safeco Field, however, foul balls meant everything.

You see, I stumbled upon a neat app called IdealSeat last month which caught my attention because of its simple premise: To help baseball fans increase their chances of catching a foul ball.

The Seattle startup is collecting crowdsourced location data from foul balls and crunching all that information into a stadium heat map. The end result is a souped-up seating chart that shows fans the best place to bring home a nice souvenir.

So on Monday afternoon, I reached out to IdealSeat co-founder Joel Banslaben to find out where I should sit.

I scored two tickets in row 14 of section 142 and was feeling great until I sat down in my seat and realized I forgot the most essential tool for snagging foul balls: a baseball glove.

No worries — I bought a beer that I knew, based on past history, could double as a mitt. 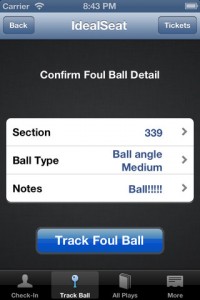 As King Felix strutted out to the mound for the 7:10 p.m. first pitch, GeekWire intern Robby Wellington fired up the iPhone-only IdealSeat app on his smartphone, while my iOS-deprived self pulled out the old school pen and pad.

We anxiously waited for foul balls, ready to pounce on any in our area and also record a description of each one. But there were only three through the first two innings.

“This is weird tracking foul balls,” Robby told me.

He was right — never had I ever paid so much attention to something relatively trivial at the ballgame. But regardless, it was kind of fun. Tracking errant hits brought a new element to the game as a spectator, and kept me locked into every single pitch.

But unfortunately, section 142 only saw one souvenir, which was given to a toddler from the ball girl. That brought up an issue: Do we count the foul balls that are picked up by ball girls, bat boys or even players and thrown into sections?

We also encountered a couple other problems with IdealSeat, at least for the common fan wanting to help contribute information. For one, it’s tough to know what every section is unless you’ve got 15/20 vision or a nice pair of binoculars. Secondly, there’s no way to verify the crowd-sourced information, so users could potentially fabricate data with no real way of looking back at the box score or game film to verify what the actual sections were.

But past those worries, I came home seeing the potential of IdealSeat more than ever. As a fan, it was fun tracking the data and I was almost bored when there weren’t frequent foul balls going up in the stands.

And of course, as Banslaben mentioned to me before, this idea could be used to show which seats are close to certain types of food and drink, or which section the sun shines the brightest on. You can even imagine something similar for non-sporting events like music concerts, with the app telling you where the speakers are so you aren’t blowing your eardrums out during a show.

There are people out there that are tracking foul balls without the help of technology, but for the rest of us that want to feel the joy and excitement of bringing home an authentic professional baseball, IdealSeat could really come in handy.

Previously on GeekWire: How the Mariners will incorporate social media with their massive new board