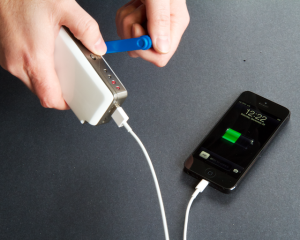 Our smartphones are, for the most part, really nice. They help us find information quickly and stay connected around-the-clock.

The battery, however, is another issue. With all the apps sucking the life out of smartphones, it’s often tough to even last 12 hours on one charge.

A Seattle emergency product company may have an answer.

SOSReady is introducing a portable smartphone charger with twist: it’s self-powered with both a lithium polymer battery inside and a built-in generator. That means that you can charge it up via the USB-standard cord with an outlet at home, and then keep it juiced on the go with a hand crank.

The company launched a Kickstarter for the SOSCharger on March 9 and they’ve surpassed the $27,000 pledge goal by more than 250 percent, reaching $72,065 as of Wednesday afternoon with 22 days left. There are nearly 2,000 backers.

“We’re really surprised,” SOSReady product manager Paul Salzman said. “We expected to go over our goal, but not that much.”

What seems to be appealing is the fact that you can charge your charger without an outlet. There is certainly a plethora of portable cell phone chargers on the market, but few that you can juice up on-the-go. Three-to-five minutes of winding gives you five-to-12 minutes of talk time, depending on your phone and network.

SOSReady has an interesting backstory. It started out in 1999 as ElectroHIFI, an importer of Grundig car audio products. But when Grundig sold off its car audio firm, ElectroHIFI pivoted into SOSReady.

Its first product, introduced more than ten years ago, was the original self-powered SOSCharger. But while the idea was similar to the current iteration, it wasn’t compatible with iPhones.

“It didn’t have an internal battery and it was designed really for flip phones, like Razrs and Nokia candy bar phones,” said Salzman, who also works full-time for HydraMedia. “It was more of an emergency product.”

So after several CAD drawings and prototypes, SOSReady finally found the right combination of size and smartphone capability — something as small and lightweight like the iPod Classic that you could use every day.

The company chose Kickstarter as a low-risk option that could help them gauge market interest in the SOSReady Charger, and it’s safe to say that it was a smart decision. Not only have they crushed their original funding goal, but they’ve received great feedback from customers.

“We couldn’t be happier with the whole Kickstarter process,” Salzman said.

SOSReady is made up of just three people: CEO Brian Legge, who is the only full-timer, along with Salzman and one other. The Kickstarter funds will help the company get its product to the market by this summer.