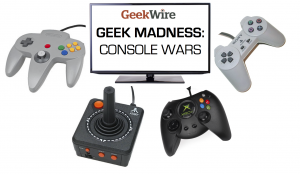 And then there were eight.

We’re more than halfway through our Geek Madness: Console Wars competition and have arrived to the much-anticipated Elite Eight round.

There are some excellent matchups in store this week that will require your votes below, but first, let’s quickly recap the last round:

No contest here, as the uber-popular NES absolutely demolished the 16-bit Intellivision console.

In a battle of Atari’s, the classic 2600 outlasted its successor and moves on to face the NES in the Elite Eight.

Really tight battle here between two of the most popular modern consoles, but it was Microsoft’s 360 squeaking out a victory over Nintendo’s Wii.

Another tight battle on the Modern Gen side of the bracket, with the PS2 ultimately outlasting Nintendo’s popular handheld device.

Now for this week’s matchups. A big thanks to Geek Madness: Console Wars sponsor Nytec for helping to make this feature possible. 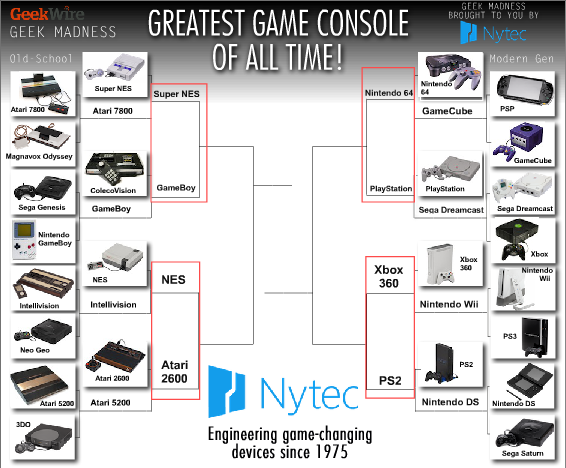 Two of Nintendo’s most iconic devices face off in this Elite Eight matchup. The Super NES’s game selection is tough to beat, but the GameBoy is the best-selling handheld console of all time.

Another game that should go down to the wire. The NES just blew out the Intellivision, but will have its hands full against Atari’s 2600.

Which console is better: Nintendo’s 64 with its unique controller, or the PlayStation and its groundbreaking disc-based games.

The Xbox vs. PlayStation debate is one of the most heated in today’s gaming world. The 360 introduced Xbox Live and Kinect sensor, while the PS2 is best-selling console of all time.