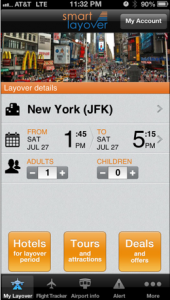 If you’ve flown for business, odds are you’ve had a frustratingly long layover before. Trying to kill five or six hours in an airport sitting in uncomfortable seats and eating mediocre, yet overpriced food, is a hassle.

Seattle-based Smart Layover hopes to change that with a new cross-platform mobile app for iOS, Android and Blackberry.

“We want to be the layover planning app for travelers worldwide,” said Smart Layover founder and CEO Sam Makaryan.

The app comes packed full of features for busy travelers looking for a quick getaway between flights. Smart Layover has partnered with Groupon to serve local deals through the app, and has begun building partnerships to get travelers deals on sightseeing attractions.

If you’ve ever found yourself wanting a hotel room for a few hours, but didn’t want to pay the price of a full night, Smart Layover can help you out. One of the marquee features of the app is the ability to book a day-use hotel room near the airport at a reduced rate. According to Makaryan, this is a win, both for travelers and hotels. 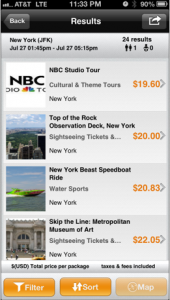 “A lot of the big hotels near airports, they only have 50 or 55 percent occupancy year-round, so this is a great opportunity for them to get extra revenue,” Makaryan said.

In addition, the app provides a flight tracker that will send push notifications about gate changes and security delays to give you information about how to get to the right gate on time to make your flight, so your excursion doesn’t cost you time.

Before you take off expecting a great layover, though, I’d recommend checking on whether or not your airport is covered by Smart Layover.

According to Makaryan, they’re currently focused on 60 major worldwide hubs, which means that while you can get deals while waiting in Seattle, you’re on your own in Portland.

Makaryan said that should change in the next month as the company builds relationships with hotels to provide services at other airports, but for now, things are still a bit spotty.