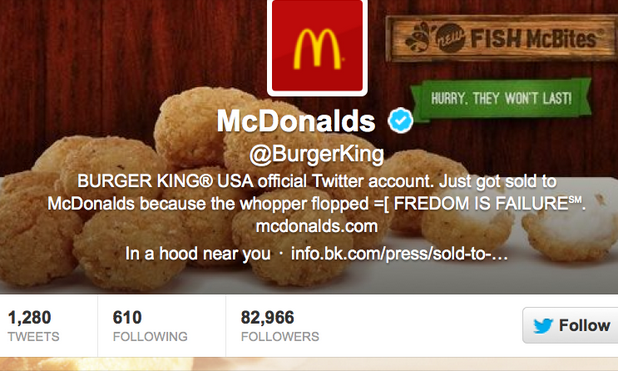 The Burger King social media team sure is having an eventful Monday morning.

The fast food company’s Twitter account, @BurgerKing, was hacked for more than an hour starting at 9 a.m. PST morning and its Twitter name was changed to “McDonalds” and logo to the Golden Arches.

The account is now suspended, but there are screenshots that will live in social media lore. Its Twitter bio was changed to this:

The hackers proceeded to Tweet out random content that included racial epithets and odd obscenities, many making fun of Burger King.

Hacker group Anonymous seems to be taking the credit after the @BurgerKing account Tweeted “Everybody follow us! @YourAnonNews #OpMadCow.” The hackers also Tweeted out “DFNCTSC,” which one New Yorker web producer noted was the same group that hacked Paris Hilton’s phone eight years ago.

82,000 people followed @BurgerKing prior to 9 a.m. this morning and the account gained more than 30,000 followers since the hack. Maybe BK should offer a couple free Whoppers to Anonymous for the increase in followers and free press.