People in the Seattle region have a front-row seat for one of Amazon’s longstanding experiments — the Amazon Fresh grocery ordering and delivery business. Those trucks that roll through our neighborhoods in the early morning are part of a costly physical infrastructure, reflecting the tough economics that have so far kept Amazon from expanding the service beyond Seattle. 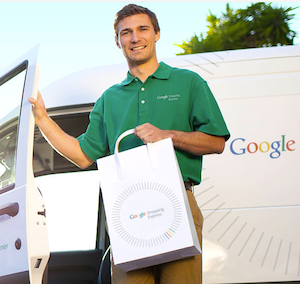 But wow, it is amazing to order groceries online late at night and have them on your doorstep before you wake up.

And here comes Google. The search company’s new local delivery experiment, Google Shopping Express, will work with established retailers in the Bay Area to let users buy items online and have them delivered on the same day. Participating companies include Target, Walgreens, Staples and other retailers, in addition to Raley’s Nob Hill Foods.

Many online startups have tried to crack the delivery business over the years. Tech giants such as Amazon and Google may have the best shot of making it work. But Google’s move is also a head-scratcher in the context of its cutbacks elsewhere.

So wait. Google, whose vision is to organize the world’s information, shuts down Google Reader. Then reincarnates Webvan.

It’s also a very tough business, as Amazon CEO Jeff Bezos made clear in his comments about Amazon Fresh in 2011.

“The reason it’s a test is because we’re still tinkering with the business to try to make the economics acceptable,” Bezos said. “It’s an expensive service to provide. We’re basically working on it here in Seattle, seeing if we can get it to work. It’s a similar kind of operation to what HomeGrocer did 10 years ago, what Webvan did 10 years ago. We like the idea of it, but we have a high bar on what we expect in terms of the business economics for something like Amazon Fresh in terms of profitability and return on investment capital.”

That said, owning the local delivery market could be a key strategic advantage for any company, with Wal-Mart reportedly considering having its own customers deliver items to online buyers in their markets.

With Amazon building out its network of distribution centers around the country, it wouldn’t be a surprise to see the company expand Amazon Fresh at some point soon. Given all of Amazon’s experience, and its tolerance for thin profit margins, a head-to-head battle between Amazon and Google in this industry would be entertaining to watch, at least.