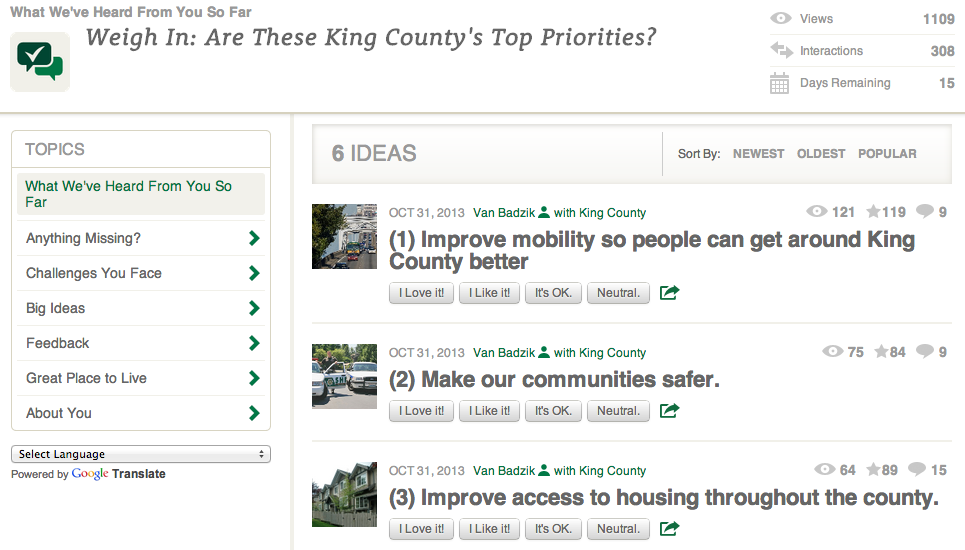 Government officials often hold public meetings as a way to hear from citizens and find out what’s going on in the community. But with work, family, friends and other important obligations, it’s not easy for people to take time out of their day to attend these events.

That’s why Seattle’s King County is using a tool called MindMixer to engage its residents in public debate. The platform allows people to discuss, “like,” and comment on county-wide issues such as public transportation, safety, and affordable housing.

It’s part of an effort by the county to update its five-year Strategic Plan, which was put in place back in 2010 as a way for King County to focus on customer service and needs of the people.

“It’s really important for us to ask residents what they want as opposed to just telling them what we’re going to do,” King County Social Media Specialist Derek Belt told us. “So, we’ve used MindMixer to ask people what our priorities should be for the next five years.”

Belt said that the beauty of the MindMixer platform is that it allows people to not only comment on other people’s ideas, but also come up with their own. It’s really an online public meeting, where people can talk amongst themselves just as much as they’re speaking to the county.

“In the past, we could only engage a few hundred people —if that — at public meetings,” Belt explained. “MindMixer gives so many more people a chance to affect the direction of their local government, and we are making regular reports to the King County Executive, Council, Sheriff and other elected officials. So far, this project has proven to be a tremendous way for people to be heard.”

Another interesting aspect of the robust MindMixer service is that it implements gamification, allowing citizens to collect points for participating in conversation. There’s even a leaderboard showing who has the most comments, the “top idea generators,” and the most active users.

The county is taking contributions until Nov. 30 and you can chime in here. For those who do not have access to the Internet at home, King County recommends visiting its libraries or one of its community partners (full list in the video below).