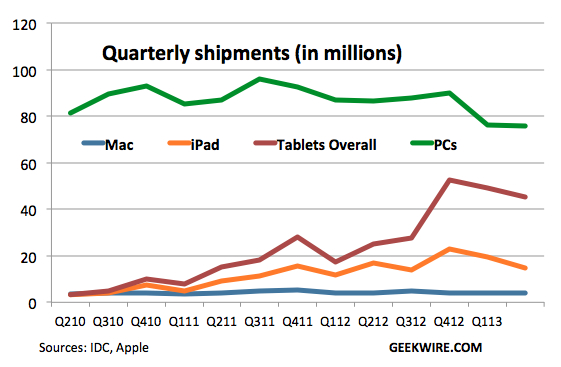 The chart above feels like the calm before the storm, that storm being the holiday shopping season.

For a while now we’ve been tracking the worldwide shipments of tablets vs. those of ‘traditional’ notebook and desktop computers, regularly updating this chart to provide a snapshot of what some people call the “Post-PC Era.”

Bottom line: Unit shipments of tablets equaled 60 percent of PC shipments for the second quarter, down from 64 percent in the first quarter.

However, one big difference this year is that Apple didn’t release a new iPad in the first part of this year. Assuming one comes out later this year, along with tablets from Amazon and others, these trends lines will be fascinating to watch over the next few quarters.