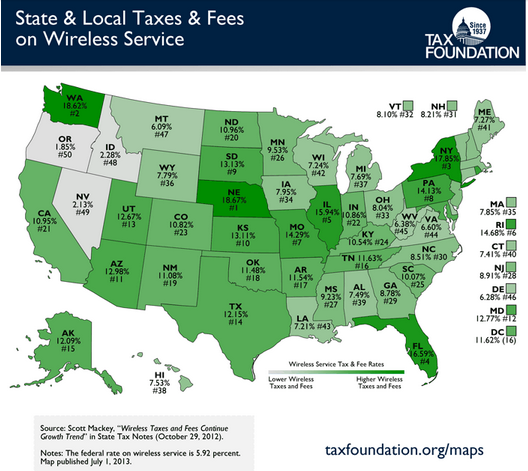 If you want to save money on state and local cell phones taxes, living in Oregon, Nevada or Idaho might be a good idea.

The Tax Foundation just put together this map from a study that was conducted earlier this year detailing combined federal-state-local wireless service tax rates for each state.

Nebraska had the highest rate at 24.49 percent, with Washington just behind at a scorching 24.44 percent. Meanwhile, Oregon had the lowest tax rate at just 7.67 percent, far below the national average of 17.18 percent. That’s largely because there are few cities in the state that have cell phone taxes. And not only does Oregon have low cell phone taxes, but the state won’t charge sales tax when you purchase the device itself.

It’s important to note that Internet data charges are exempt from being taxed under federal law, so these numbers only look at taxes on voice plans. Regardless, a nice little chunk of your monthly bill is going to a government entity of some sort.

The Tax Foundation noted how some states bake taxes and fees into your bill without customers really noticing. It cited a 2007 lawsuit filed by Texas against Sprint, with the state suing the carrier for listing “a state tax as a line-item on its bill rather than hiding it from customers.”

“Making cell phone calls and using wireless services for additional purposes may be getting easier, but paying cell phone taxes is not,” The Tax Foundation wrote. “State and local governments should not single out one product for stealth tax increases as they are doing with wireless services. Such actions distort market decisions and risk slowing investment that contributes to economic growth.”

The Wireless Fairness Act, which is still awaiting Senate approval, would put a hold on any new taxes or fees on mobile phone bills for the next five years.