Technology journalist Fred Vogelstein, a Wired magazine contributing editor, spoke to us this week on an iPhone 5, his third Apple smartphone. And when he started writing his new book — Dogfight: How Apple and Google Went to War and Started a Revolution — his hunch was that Apple would be able to leverage its design prowess to ultimately prevail over Google in their escalating competition.

But the process of working on the book gave him a different perspective.

“One of the problems here is that Apple, in order to stay competitive, has to boil the ocean every three to five years,” he explained, citing the iPhone and then the iPad as prime examples that forced competitors to scramble.

“Essentially that’s the bar that Apple has. Every three to five years it has to come out with a product that turns the world on its ear to continue to succeed. Because ultimately, after a well-designed product has been in the marketplace for three some-odd years, the competitive advantage from a design perspective really starts to go away.” 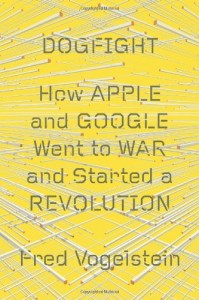 Reinventing the television appears to be Apple’s next opportunity to set a new standard, and put its rivals on their heels, but that hasn’t happened yet, and Vogelstein said he’s starting to wonder if it ever will.

“Meanwhile, all Google has to do is figure out a way to get Android on as many different devices as it possibly can,” he said. “So in some respects, Google’s bar is much lower. Yes, there is the huge problem with Android fragmentation. Yes, there is the huge problem of the app store not being as slick. Yes, there’s the problem of developers not making as much money there, but it seems pretty clear that Google is getting on top of all of those. … The bar for Google to succeed is much lower than the bar for Apple to succeed.”

That’s just one aspect of Vogelstein’s perspective on the Apple-Google competition, and its implications for the broader tech industry.

For more, he’ll be appearing at Town Hall in Seattle tonight to talk about his book with Jay Greene of the Seattle Times. Tickets are available here.