Seattle startups have been pretty dang creative with how they hire talented developers. Two years ago, Cheezburger stood outside of an Amazon company meeting with free Dick’s cheeseburgers in hopes of luring talent away from the online giant. Then, now-defunct Giant Thinkwell tried giving away free cats in exchange for interviews. 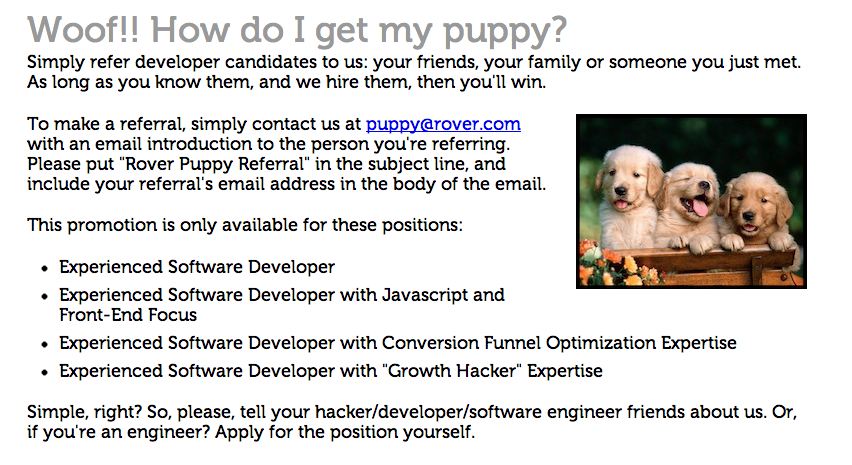 For the next 30 days, Rover is offering a free puppy — yes, a free puppy — to anyone who refers a potential developer that the Seattle startup eventually ends up hiring. And not only that, but Rover is throwing in one year of free dog sitting.

“Giant Thinkwell’s stunt was just sort of a joke, but I thought, “hmmm…what if we gave away an actual puppy?,” Porad told GeekWire. “I bet that would get some attention!”

Just a few weeks ago, Porad penned a post on GeekWire discussing the difficulties of hiring talented developers.

“The market for engineers is tight because they’re so critical to the success of startups,” Porad said. “So, creative companies that offer a great place to work are going to do better at attracting engineers, and have more success.”

Now, Rover won’t exactly give you a puppy — they are actually awarding $1,000 toward the purchase of a new dog. In that sense, you could technically just take the $1,000 as a normal cash referral bonus.

But the company definitely wants you to use that money toward a new family friend.

“I’d really prefer if a winner got a dog, assuming they can care for it appropriately,” Porad said. “Cash is fleeting, but a dog is forever.”

Rover.com just fetched $7 million in fresh funding. The money comes three months after Rover.com’s primary rival, DogVacay, scored $6 million from Benchmark and others. It also follows a $3.4 million round in Rover.com last year.