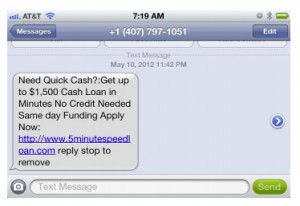 According to a press release put out by the Washington State Attorney General’s office today, AT&T, Sprint and T-Mobile have vowed to stop charging customers for the use of Premium SMS texting services, which allow third-party companies to charge wireless subscribers for messaging services like horoscopes through their phone bills.

While PSMS has some legitimate uses, like allowing people to make charitable donations using text messages, it’s also used by scammers and questionably legal enterprises to charge users for receiving spammy services that they may not even know come with a price tag above and beyond a normal text message. One particular case installed malware on Android phones that posed as a copy of Angry Birds, but instead charged users £15 for every launch through PSMS.

That’s why Washington State Attorney General Bob Ferguson has been working with the attorneys general of 44 other states to try and put an end to the practice of PSMS billing. “This is a victory for cell phone users in Washington and across the nation,” he said in a press release. “I am hopeful other phone carriers will follow this lead. My office will continue to work with other states for industry reforms and to recover money for consumers victimized by unauthorized mobile charges.”

Notably absent from the list of carriers is Verizon, which provided GeekWire with the following statement from William B. Petersen, the company’s General Counsel:

“While we don’t agree with all of the Attorney General’s allegations, we respect his efforts in this area. For years, Verizon has been vigilant in protecting our customers from bad actors. There have been numerous times we have terminated programs and in some cases have taken aggressive legal action in order to ensure our customers were protected. Since premium messaging was first introduced, technology advances and smartphone adoption have dramatically changed the way customers access information. Verizon had previously decided to exit the premium messaging business because of these changes as well as recent allegations that third parties have engaged in improper conduct in providing premium messaging services to our customers. We are in the process of winding down our premium messaging business. Verizon will, however, continue to support text-to-donate for charitable programs and text-to-contribute for political campaigns that use this technology.”

T-Mobile has posted a FAQ about the change to its website, including an assurance that text-to-donate programs will continue even as it winds down other parts of its PSMS business. We’ve reached out to AT&T and Sprint to see if they also plan to continue to offer text-to-donate services, and will update this post when we hear back.