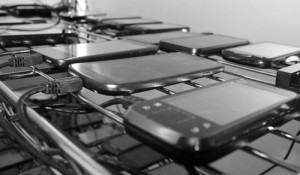 You know your startup is doing something right when the CIA’s investment arm decides to invest some money into the business.

That’s exactly what has happened to Portland-based AppThwack, a small business of four employees founded by two former Intel employees that tests mobile apps for developers.

AppThwack announced today a “strategic partnership” with In-Q-Tel (IQT), an independent, non-profit organization which identifies and teams up with companies that serve the national security interests of the U.S. Intelligence Community.

AppThwack was founded in March 2012 by Trent Peterson and Pawel Wojnarowicz, who spent seven years together at Intel leading the design, development, and deployment of an automation framework used for testing all of Intel’s wireless products.

They started AppThwack, a graduate of the Portland Seed Fund and Portland Incubator Experiment, to help developers test their apps in the most fast, easy and flexible way possible — all in the cloud. The startup can test mobile apps across hundreds of devices from Android to iPhone in under ten minutes.

“Your other option — which quality assurance agencies and engineering teams do — is to buy hundreds of devices and test on each one individually,” Peterson told us.

“The market is growing rapidly so we’re plenty busy,” Peterson said. “Looking out further it’s clear the future holds more diverse and interconnected devices, and AppThwack will serve as the platform on which this complex ecosystem is tested, making sure technology works the way companies intend and customers expect.”

IQT hopes that the new partnership with AppThwack will help customers of the U.S. Intelligence Community test their apps quickly and efficiently.

“Due to the wide adoption of apps, both for external and internal use, along with increasingly popular internal app markets and bring-your-own-device (BYOD) policies, there’s a great need to test and vet apps within the enterprise,” Jay Emmanuel, Senior Vice President of IQT’s Mobility practice, said in a statement. “AppThwack’s technology provides an excellent user interface and easy to read reports, making it easier to quickly identify problems before deploying mobile applications. We’re excited to help extend this capability to our Intelligence Community partners.”

If anything, the investment from IQT is a stamp of approval for AppThwack, which raised $600,000 in a seed round earlier this year. Check out some of the other companies IQT has invested in here.