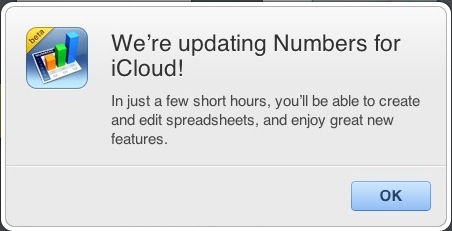 Microsoft may have some tougher competition coming for Office this afternoon.

First spotted by MacRumors, Apple has posted a notice on iCloud.com that the service will be back in “just a few short hours,” which is right around the time of Apple’s keynote in San Francisco. A new version of iWork is among the smorgasbord of products rumored to be announced today, and it seems like that rumor just got a whole lot more credence.

Apple has been stepping up its game when it comes to iWork, the company’s competitor to Microsoft Office. Apple offers the beta for free, which allows people with an iCloud account to use the company’s productivity suite online. It’s not clear what the refresh will bring, but it’s clear that Apple is trying to get the most leverage it can out of not charging a subscription for iWork.

Apple is also offering the iWork apps for free on new iOS devices. Microsoft offers Office 365 on iPhone but requires a $100/year subscription. The Redmond company plans to offer Office for iPad, but hasn’t yet provided a timetable.

If you’re interested in streaming Apple’s keynote when it starts at 10 a.m. this morning, the company has an official stream available here. We’ll also be covering all of the announcements as they come.

Previously on GeekWire: New iPads and more: What to expect from Apple this week