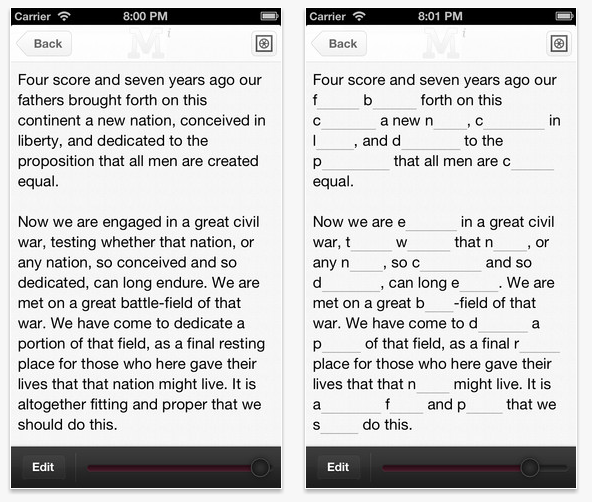 Our new App of the Week is great for students, or anyone else who needs to memorize something, and there’s a very Seattle story behind it.

It’s called Mind Vault, and it’s available for $2.99 for iPhone and iPad. The app lets you enter any text you want by copying and pasting from an email, website or other document on your phone. Once the text is saved, a slider at the bottom of the screen lets you gradually remove portions of the text as you recite it, automatically testing you and helping you to memorize the passage.

Once you’ve got it memorized, you can press a button to put the text into the “vault,” where you can access it again if needed.

The backstory is that the app was developed (mostly) on the ferry. Noah Read, a designer who commutes to work in Seattle from Bainbridge Island, was looking for an excuse to learn how to make apps. He wanted to start memorizing things, and had found apps that used predetermined content, but wanted one that would let people input custom text to memorize anything they wanted.

“I figured this was my opportunity and set out learning how to program,” he says. “I knew the technique of removing letters as you recite so I built the app around that. I wanted it to be simple and focused, for the user’s benefit and mine.”

He notes that he’s “very pleased with the parsing that makes the whole thing work.”

We agree — it’s a very useful tool, and a great first app for Read. Here’s the download page.

Listen to the segment via this MP3 file or the audio player below.