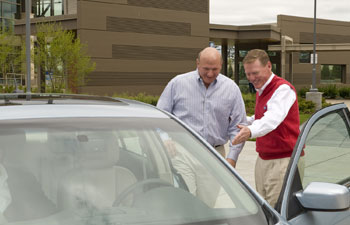 One of my most vivid memories of the 2009 Consumer Electronics Show in Las Vegas is what Ford CEO Alan Mulally did after delivering a big keynote address.

Rather than escaping out the back, as most tech execs do, the former Boeing Commercial Airplanes chief walked off to the side of the stage in his iconic red sweater vest and fielded a barrage of questions from a crowd of surprised reporters.

“Ford is so lucky to have this guy,” said a former Boeing worker who happened to be in the audience at the time.

Would Microsoft be so lucky, too?

Mulally’s personality, experience and leadership abilities are some of the factors that would make him a fascinating choice to become Microsoft’s next CEO. After initially denying that he was interested in succeeding Steve Ballmer, Mulally re-emerged as a top contender this week with Kara Swisher’s report that the Ford CEO has warmed to the idea.

The big question is whether Microsoft’s board would actually tap him for the job. One major red flag is Mulally’s age. At 68, he’s more than a decade older than Ballmer. He has been Medicare-eligible for three years, as cheekily noted by KING TV aerospace reporter Glenn Farley in his piece about Mulally and Microsoft that aired at the end of the week.

Mulally’s age doesn’t appear to be slowing him down, but the reality is that it would make his appointment feel more interim, not the long-term leadership solution that Microsoft seems to need at this point. This was the first point made by Bloomberg Businessweek’s Diane Brady in a post saying that Microsoft shouldn’t name Mulally CEO.

But setting aside the issue of age, some reporters who covered Mulally during his time at Boeing seem to be more optimistic about his chances to effectively lead Microsoft. The leap from planes and cars to devices and software might seem like a big one, but Mulally’s background as an aerospace engineer means he has technical chops to go along with his management experience, and he could no doubt quickly get up to speed.

Another aerospace reporter who covered Mulally during his Boeing years, Steve Wilhelm of the Puget Sound Business Journal, has some great anecdotes in this piece about his experience with the former Boeing Commercial Airplanes chief, explaining how Mulally navigated critical and controversial decisions at Boeing before going to Ford.

Mulally still has a home in the Seattle region, and Ballmer reportedly shaped the “One Microsoft” reorganization in part after Mulally’s strategy for realigning Ford around functional disciplines rather than internal divisions.

But if Microsoft’s board ultimately does name Mulally as CEO, and he takes the job, it seems like the move would have to be done in conjunction with a broader succession plan, including a second-in-command with more extensive experience in the tech industry.

At the very least, I’m not as skeptical as I have been in the past that Mulally could be a serious contender for the job. Maybe it’s time for the Seattle region’s retailers to start stocking up on blue sweater vests.