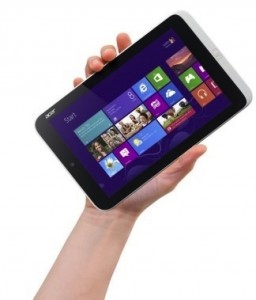 Acer announced a new lineup of Windows 8 notebooks, tablets and hybrids last week, but one product missing from the unveiling was the company’s rumored 8-inch Windows 8 tablet. No problem: Amazon inadvertently announced the smaller tablet on Acer’s behalf by publishing the product page ahead of schedule.

PC World spotted the Acer product listing and took screenshots before it was pulled from Amazon.

This is poised to be the first 8-inch Windows 8 tablet, taking advantage of Microsoft’s newly relaxed guidelines for PC makers, which allow for smaller screens and better aspect ratios. Microsoft hopes the greater flexibility in hardware will help Windows 8 tablets better compete with the iPad mini, Kindle Fire and smaller Android tablets.

Not only is the screen smaller, but the aspect ratio makes the device appropriate to use in both portrait and landscape mode. This has been a problem for the first wave Windows 8 and Windows RT tablets, such as Microsoft’s own Surface Pro and RT, with their 16:9 aspect ratios making them best in landscape mode and somewhat ridiculous in portrait.

It might be hard to see, but note the positioning of the physical Start button on the white border in the leaked image above, signaling how Acer expects the tablet to be used.

Ed Bott of ZDNet has more on the specs. No word yet on the actual unveiling or release date for this Acer tablet.

However, Acer is making it clear that it’s waiting to proceed with Windows RT. That version of Windows 8 runs on power-efficient ARM processors but doesn’t run traditional Windows applications. Acer President Jim Wong told PC World that the company has delayed the release of its Windows RT tablet, and is waiting to see what Microsoft comes up with in a future update to the operating system.

“To be honest, there’s no value doing the current version of RT,” Wong told the site.