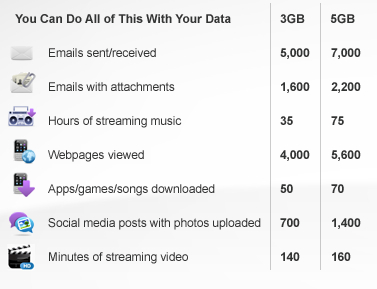 AT&T today got more specific about how it will handle heavy usage of its wireless network by people grandfathered in to unlimited data plans.

In the past, the company has said that it reduces speeds after people enter the top 5 percent of data usage. But that left vague the actual amount of data usage that would trigger the throttling.

Today, the company said it’s officially setting the thresholds at 5 GB of data per month for LTE smartphone users on unlimited plans and 3GB of data for all others. The specifics are outlined in a new section of the AT&T website, which also includes the graphic at right, implicitly making the case for the reasonableness of the thresholds.

These limits are one of the ways some wireless carriers are grappling with the boom in wireless data usage and the limits of their networks. AT&T no longer offers unlimited plans to new users.

Here’s the full text of a statement issued by the company on the policy.

With mobile data usage continuing to skyrocket and the availability of spectrum scarce, AT&T, like other wireless companies, manages its network in the most fair way possible so that we can provide the best possible mobile broadband experience for all our customers.

How we’re managing the network only affects a small minority of the heaviest smartphone data users still on unlimited plans.  Put another way, this does not impact more than 95 percent of our smartphone customers.

Our unlimited plan customers have told us they want more clarity around how the program works and what they can expect. Here’s what customers need to know:

·   Customers with a 3G or 4G smartphone – who also still have our unlimited data plan – will see speeds reduced if they use 3GB (gigabytes) of data or more in a billing cycle. Speeds will return to normal at the start of the next billing cycle. For context, less than 5 percent of smartphone customers use more than 3GB per month.

·  For customers with a 4G LTE smartphone – who also still have our unlimited data plan – data speeds will be reduced if usage is 5GB (gigabytes) or more in a billing cycle. Speeds will return to normal at the start of the next billing cycle.

Customers will get a text message from us before experiencing a change in speed.

Even with reduced data speeds, these customers will still be able to email and surf the web, and continue to use an unlimited amount of data each month.

Not impacted by this program, launched last year, are customers on our tiered data plans.

Because spectrum is limited and data usage continues to soar, we manage our network this way to be as fair as possible and so we can provide the best possible mobile broadband experience to everyone.

We encourage all of our customers to use Wi-Fi whenever possible – especially when watching video, which is the most data-intensive activity. That’s because data activity over Wi-Fi does not count against the threshold for unlimited customers that triggers reduced data speeds or against customers’ tiered data plans. Customers can find out more at www.att.com/datainfo.