I was in attendance at yesterday’s Microsoft event in San Francisco where the company unveiled the new version of Office. We are part of a small group of customers who have been evaluating the new version over the past couple of months using a pre-release version of Windows 8 and Office 2013 running on a Samsung Series 7 Slate. 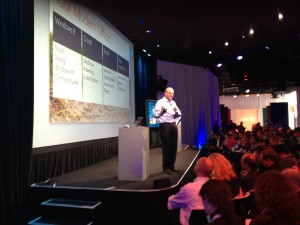 The promise of this new version of Office is two-fold. First, it is designed to work seamlessly between mouse, pen and touch input methods. Second, it makes heavy use of Microsoft cloud services, namely SkyDrive/Office 365 and Skype as well. Does it deliver on those promises? In some cases yes, but it is not perfect.

Office has been around forever and naturally is a very mouse-centric experience. That experience will feel similar to other recent versions and certainly will remain an important way of creating content and interacting with the Office apps.

Pen input has also been around in Office for quite a number of years, and anyone who has run a Tablet PC will recognize the history of this functionality. I have found the pen input to be mostly satisfying. The text recognition of my terrible handwriting is excellent, and there are some novel ways to edit handwritten text before inserting it into a document. Adding handwritten notes and highlights across all of the apps is pretty straightforward with consistent pen tools available in each. My only complaint, and maybe this is hardware-based, is that the rendering of ink does chase the stylus just a tad when you are writing quickly. The lag is slight, but makes writing not quite as natural as on paper. 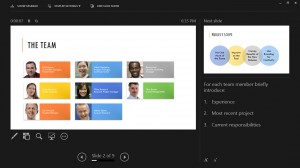 Using Office on a touch-based tablet is the big bet in this version. Office is feature-laden and long-time users will want to be able to access the functionality they are accustomed to without a keyboard or stylus. In some areas, the suite succeeds very nicely. Finger flicks and pinch/zoom make PowerPoint presentations a snap, and paging through Word docs in their new reading mode or moving around a spreadsheet is similarly easy. Custom touch interfaces only go so far in the apps, however, and I’ve found that a lot of the detailed menus and dialogs are still tuned for the mouse/pen. Many of the toolbar buttons and dialogs remain quite small for fat-fingered input, such basic file selection dialogs, changing line spacing, etc. While still usable, it would benefit from larger/simpler selection of controls when using the apps with your fingers.

Personally I found the UI on Office more familiar and similar to previous versions than Windows 8 itself. Windows 8 is a big change, and there are a core set of gestures that you need to get accustomed to to be productive, whether in Office or elsewhere. While none of the gestures are particularly difficult, it is different and takes a little getting used to.

This is the first version of Office that wants you to sign in. Logging in gives you a few benefits. First, any settings and customizations that you have made to the apps will follow you from computer to computer. Anyone who likes to customize their programs and then has to re-do the settings on their home computer will love this.

The second reason to sign in is that the default save location for documents is the cloud. For consumers, this is SkyDrive. The benefits of anywhere/anytime access to your files are pretty obvious, and the free version of SkyDrive gives you 7GB of storage for free, with options to pay for more. Yesterday’s announce said less about the business version of cloud storage, but there will be a new service called SkyDrive Pro, which offers the same cloud storage functionality, but allows company IT control for the provisioning of this storage. I’m pretty sure that SkyDrive Pro is going to be rolled out as part of the Office 365 subscriptions.

A new way to buy Office

Microsoft wants you to subscribe to the new version of Office. A subscription gets you access to Office on up to 5 PCs, including Macs, which could be a great way to outfit a family with multiple computers. With the subscription comes the ability to actually stream a version of Office to any PC where you happen to be, whether that is a friend’s computer or kiosk machine. Having installed Office more times than I can count, I was skeptical that this could be a good experience, even with a high speed connection. I thought they may virtualize the app on their own servers to make it quick, but what they showed off yesterday was actually streaming the bits to the new PC. In a novel bit of installation engineering, the streaming download will bring down the minimum number of bits you need to start the app, and then keeps going in the background as you access new features, etc. Eventually your computer will have an offline version of the apps installed.

I think the most confusing part of the new Office subscription is the naming. They’ve rolled the applications under the Office 365 brand. If you buy Office 365 Home Premium, you get the apps, and then as you move up the stack, they start including services like Exchange Online and SharePoint Online for businesses. As an Office 365 customer, I think the new branding makes it difficult to answer “what is Office 365?” 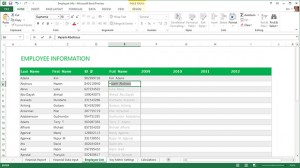 There are a few eye-catching features in the apps themselves. As a heavy Excel user, I’ve often created functions to manipulate values in XLS cells. Flash Fill is a new feature that lets you concatenate multiple cells or parse and break apart values in those cells with some simple text pattern matching, without having to do any formulas or macros. Hard to describe here, but simple in practice. It will make you ask why someone hadn’t thought of that sooner if you are an Excel data geek.

Excel gets my other favorite feature, which is a new view called Power View. Power View enables interactive dashboard views into spreadsheet data, providing charts, maps, graphs and tables with interactive sliders and buttons to change the views of the data. Power View is similar to some of the things you can do with Tableau, and the new functionality make me wonder if the Seattle startup is a potential partnership or acquisition target.

Can Microsoft win the tablet wars?

Apple seems to have run away with the tablet market and no one has yet to create a popular alternative. Microsoft’s own tablet attempts in the last decade haven’t achieved mass market appeal, suffering from hardware price points that were too high and software that really wasn’t optimized for the experience of a slate computer. Hardware advances have brought price points in line, and competitive pressure has obviously forced Microsoft to rethink their OS and apps in a tablet world. 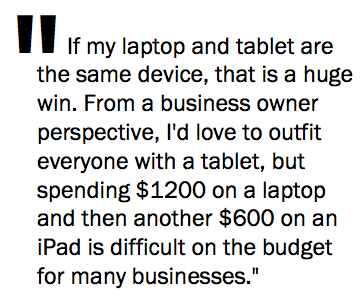 Microsoft has a a potential advantage in the tablet competition, despite the large adoption of iPads and the fact that they don’t even have a solution in market yet. For me, it boils down to a device that can be both a content consumption device and a content creation device.  iPads excel at media consumption, but rarely do I create anything of substance on one. Even Apple wants you to buy a MacBook + iPad for the full experience.

If my laptop and tablet are the same device, that is a huge win. From a business owner perspective, I’d love to outfit everyone with a tablet, but spending $1200 on a laptop and then another $600 on an iPad is difficult on the budget for many businesses. If you get the tablet/laptop/desktop functionality all rolled into one device that you are assured runs all of your business apps, that seems like an easy sell, at least in the business world.

The new version of Office is not perfect, and making the apps cooperate nicely with mouse/pen/touch is a challenge for any UI designer, particularly with the legacy that Office has. However, if hardware makers can roll an all-in-one solution that is both laptop and tablet, I do think there is a reasonably good chance of success for Microsoft.

You can try out the new versions for yourself as part of the Customer Preview.