By now, you may have heard that the University of Washington athletic department reprimanded a reporter for Tweeting too much during a college basketball game.

The decision generated tons of discussion both here on GeekWire and around the web. We dug a little further to figure out what other big schools along the west coast have live coverage policies, and it appears no one in the Pacific-12 conference has a strict policy with caps on the number of updates like the University of Washington’s. USC, a private institution, is the other school that also has a written live coverage policy. (See quotes from school representatives below)

UW athletic director Scott Woodward was on Dave “Softy” Mahler’s radio show this morning and Softy began the interview by asking Woodward about the UW’s live coverage policy. The athletic director said he didn’t think it was a big story, pointing out that the school simply wants to protect its live media rights.

“We’re always going to protect live descriptions of events,” Woodward said. “That’s something that has always been our right for decades and continues to be so. As technology gets better and better, we’re going to have to be more vigilant about how we do it, but also understand that reporting has changed, too. There’s a fine line there and we’re always going to be cognizant and reasonable.”

Woodward continued, telling Softy that his own radio station pays a premium to broadcast UW games live and “we don’t want that diminished, nor do we anything else diminished whether it’s T.V. or live events.”

“We are all on it, and like I said, it’s one of these things that was announced a long time ago and I don’t think it’s that big of a deal,” he said.

It seems like the big issue with live coverage is the idea of play-by-play updates versus normal commentary. Tom Duddleston, who manages athletic communications at the University of Arizona, said that while the Wildcats don’t have a written policy, it’s “common sense,” for reporters not to Tweet out every single play.

“You can tweet, you can blog, you can do whatever you want, but any play-by-play description of the event is going too far,” he said. 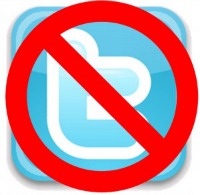 In fact, Twitter won’t even allow it. Arizona’s athletic department actually tried Tweeting out every play during a football game and Twitter shut them down for Tweeting too many times in one minute.

Duddleston says he understands where the UW is coming from, but isn’t quite sure he’d take the same steps to combat too many live updates.

“It’s within their rights to do that if they feel like a media member is stepping on the information stream,” he said. “Schools do implicitly retain live rights to streams of their game, but with someone’s Twitter feed, I don’t know — that’s a tough deal.”

The NCAA actually states something about live coverage in its social media policy. Chris Daniels over at KING5 has also been following the story and Tweeted this out about the policy.

Here’s the policy, which says that the NCAA reserves the right to revoke press credentials if it “deems that the media member is producing a real-time description of the contest.”

The NCAA actually implemented something like this back in 2007. Brian Bennett, a reporter for the Courier-Journal out of Louisville, was ejected from an NCAA postseason baseball game for violating NCAA policy for live updating.

Bennett posted 16 in-game blog updates before he was asked to leave the press box. A memo from the NCAA stated that any blog containing action photos or game reports would be prohibited.

The NCAA clarified its position a few days later and said that live updates from NCAA events are permitted as long they only include scores and time remaining and no commentary. Oddly enough, that seems like a completely opposite mindset with schools today.

The Courier-Journal’s executive editor challenged the action and the newspaper’s lawyer had this to say:

“It’s a real question that we’re being deprived of our right to report within the First Amendment from a public facility,” said Jon L. Fleischaker, the newspaper’s attorney.

“Once a player hits a home run, that’s a fact. It’s on TV. Everybody sees it. (The NCAA) can’t copyright that fact. The blog wasn’t a simulcast or a recreation of the game. It was an analysis.”

The newspaper decided not to file a lawsuit. The Student Press Law Center has a more detailed analysis of this controversy.

Here’s a list of nearly all the Pac-12 schools and whether or not they have a live coverage policy.

Live coverage policy: Yes, with limit on number of updates. (45 for football games, 20 for basketball games)

Quote: Declined to comment, only saying that the policy was put into place at the beginning of the 2012-’13 athletic season.

Quote: Reached out for comment, no response yet. But KING5’s Chris Daniels reports they do not have a live coverage policy.

Quote: “We do not have a live coverage policy and do not have any plans to implement one in the future.” — Craig Pintens, Oregon senior associate athletic director.

Quote: “We don’t have a policy about live updates, nor have we discussed implementing one.” — Steve Fenk, OSU associate athletic director for communications.

Quote: “As far as I know, we don’t put a limit. We don’t have a social media live coverage policy.” — Sundeep Dhillon, Cal social media manager.

Quote: “We don’t have a live Tweeting policy. We don’t anticipate starting one unless the Pac-12 makes us. We don’t consider it to be an issue.” — Liza David, UCLA director of new media.

Live coverage policy: Yes, a policy that limits play-by-play updates. Been in effect for three years without issues and have yet to reprimand any reporter for over-Tweeting.

Quote: “The media is welcome to Tweet after scoring plays and periodically throughout the game.  However, play-by-play via social media (Twitter, Facebook, live chat, etc.) is prohibited. I think just generally speaking what we’re trying to do is steer people toward partnerships we have with radio, television and our own web presence. We don’t want people taken way from that experience.” — Jordan Moore, USC director of social media.

Quote: “We don’t have a written live coverage policy, but we have an understanding with reporters that they won’t Tweet every play. In other words, you can tweet, you can blog, you can do whatever you want, but any play-by-play description of the event is going too far.” — Tom Duddleston, UA director of communications services.

Quote: “I don’t know how you monitor that kind of thing, and we are just investing our energy elsewhere.” — Doug Tammaro, ASU director of media relations.

Quote: “We do not allow live reports from practice, but you can tweet, update, etc. to your heart’s content from live events. The more the merrier!” — Liz Abel, Utah senior associate athletics director.

Quote: “We remind reporters that it’s a rights issue with radio and people aren’t supposed to be Tweeting out play-by-play. If the reporter Tweets or blogs and it’s not coming across as play-by-play, we don’t have a problem with that. The reporters don’t have time to do [play-by-play]. If they assigned a person to provide play-by-play updates, I’m sure we would have an issue. But we haven’t had anything close to that.” — David Plati, Colorado sports information director.