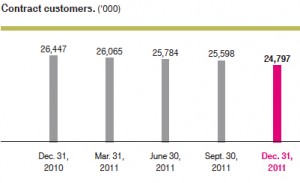 What’s the price of being the only major U.S. carrier without Apple’s iPhone? T-Mobile USA’s parent company Deutsche Telekom gave a sense of it overnight in its latest earnings report — disclosing a net decrease of more than 800,000 contract customers for T-Mobile USA during the fourth quarter alone.

Aiming to get the company back into growth mode, executives announced plans to upgrade T-Mobile USA’s network capabilities by rolling out 4G LTE starting next year and cementing its position as a low-cost wireless carrier.

“2011 was very difficult for T-Mobile USA, particularly the fourth quarter,” said René Obermann, Deutsche Telekom CEO, in  prepared remarks at the company’s annual press conference in Bonn, Germany. “T-Mobile USA has a high-quality network, offers excellent value for (the) money, and a broad device portfolio, but that was not sufficient to offset the successful launch of the iPhone 4S in the United States. It boosted sales among our competitors, but it also cut their margins drastically.”

Obermann said the iPhone 4S launch and the resulting customer losses “had a direct impact” on T-Mobile USA’s revenue, which fell 3.3 percent to $20.6 billion for the year.

Bellevue-based T-Mobile USA is looking to rebound after regulators scuttled AT&T’s proposed acquisition of the company. Deutsche Telekom announced as part of the earnings report today that T-Mobile will be able to launch a 4G network in the U.S. starting in 2013, in part by leveraging spectrum received from AT&T after the proposed deal fell through.

The company says it will invest $4 billion to modernize the T-Mobile USA network and deploy LTE.

T-Mobile CEO Philipp Humm said in a statement, “We want to be known for delivering the best value in wireless because of the advanced technology we deliver at an affordable price. Over the next two years, we’re prioritizing and investing in initiatives designed to get T-Mobile back to growth in the years ahead — beginning with the transformation of our network.”

The company also says it is revamping T-Mobile USA’s brand identity to underscore its position as a value provider, and plans to ramp up its sales and marketing efforts to businesses, adding about 1,000 employees in that area.

DT’s earnings overall were also helped in the fourth quarter by the $3 billion in cash received as a breakup fee from AT&T.