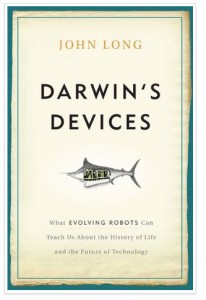 A fish may not need a bicycle, but a bicycle could learn a lot about the mechanics of movement from a fish. A group of robotics experts gathered today at a “Biorobotics Roundtable” sponsored by Kirkland robotics maker Coroware to discuss how building robotic fish can help us better understand evolution, locomotion, even swarm behavior.

The discussion, led by Keith Seinfeld, health and science reporter for KPLU, opened with thoughts from Dr. John Long, author of Darwin’s Devices: What Evolving Robots Can Teach Us About the History of Life and the Future of Technology and member of the cognitive sciences faculty at Vassar College. Dr. Long’s explained how his research on vertebrates led him to develop robotic ancient fish.

“The problem with fossils,” said Long, “is that they don’t tell you anything about behavior.”

By bringing extinct animals to “life” using robotics to replicate their movements, his team could observe how prey extinct for billions of years might have eluded equally extinct predators, testing a hypothesis that the first vertebrate evolved for in response to improving feeding/fleeing behavior. In the team’s hands, the long-dead drepanaspis, which Long describes as looking like “a pancake with tail,” is brought to life using robotics and a simple head made of Tupperware. The fun begins when, as Long says, “Predator and prey robots reenact the game of life.”

Like Long, biorobotics engineer James Tangorra is interested in how fish move. His special area of interest is fins, specifically looking at the mechanical properties of fins and how they interact with sensory information and neural-based controls.

Fish are fast. They are also experts at maneuvering. How are they able to so skillfully locomote, especially through something as dense as water? Looking at the physics of it, the “truth of what makes it work” and creating robots that can make similar movements is what Tangorra calls “biology leading engineering.”

The roundtable participants also included Dan Kara, an analyst and publisher of Robotics Trends. The group discussed what they thought the future of robotics looked like, with Kara positing that robots will continue to follow what evolution has provided; citing rescue robots that move like snakes and underwater robots shaped like bluefin tuna scouring tankers for oil leaks.

Dr. John is interested in what happens when you put a group of robots in the water and don’t allow them to communicate with each other. Would they exhibit group behavior, like schooling fish?

Tangorra summarized his thoughts by stating that studying biology “teaches us ways to design and build from fundamental physics.” There are important lessons to learn before we, too, are swimming with the fishes and robots have perhaps taken over the world.

Watch the archived discussion on the CoroWare Robotics channel.

Michelle Riggen-Ransom is a curious writer, a passionate start-up founder and a lifelong teller of stories and adventures. She runs Social Glu communications consulting and spends much of her time drinking coffee, looking out at the unending majesty of Puget Sound and thinking about going to hot yoga.