Our guest on a recent episode of the GeekWire radio show and podcast was Seattle tech veteran Kevin Lisota, the CEO of real estate startup Findwell.

We talked about how technology has been changing the process of buying and selling homes (and how it hasn’t), and explored the recent dustup over real estate listing services such as Zillow and Trulia, and their roles in the industry.

If you missed the show, or prefer text, continue reading for edited excerpts from our conversation.

Todd Bishop, GeekWire: How has buying and selling a home been changed by technology over the last 3-5 years?

Kevin Lisota, Findwell: Five years ago or even when I was thinking about my own startup I thought that technology was going to play this huge role in actually removing real estate agents from the process. Part of it is probably the downturn in the market, part of it is just people are worried when they go to buy a house (but) the role of the agent has remained. What has really changed is the mechanism by which people search for homes and advertise homes for sale. Nobody is looking in newspapers anymore. Everybody is self-sufficient in their searches. They’re still using agents in that process, it’s just that the agent as the gatekeeper of the listing data has disappeared.

TB: In another five, 10 or 15 years, could the agents’ role be diminished even further or go away?

Listen to GeekWire every weekend — at 7 a.m. Saturdays and 1 p.m. Sundays on 97.3 KIRO-FM in the Seattle region. Or subscribe to the podcast using this RSS feed, iTunes or Zune.

Lisota: If you asked me that question a few years ago I probably would have given you a different answer. And I think if you asked all the startups in this space — Zillow or Redfin or whoever — if you go back to their original business plan, it probably said we’re just going to flat-out replace all of these agents. It hasn’t happened. Actually the use of agents has gone up, and that’s primarily because the real estate market went down. I think there’s always going to be a role. … Even the most tech-savvy people that I work with actually find tremendous value in using an agent. The role will be diminished but I don’t think it’s going away anytime soon.

John Cook, GeekWire: One of the interesting issues we’ve seen lately is that a broker in San Diego came out and said he was going to remove his listings from sites such as Zillow and Trulia. I wanted to get your sense on this issue, whether you think these services are good for the agent or bad for the agent. 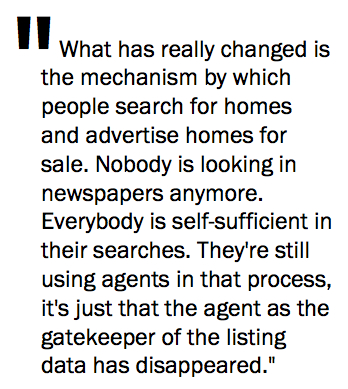 Lisota: And if you were planning to sell your house, would you want your house advertised in front of that audience?

JC: Well, that’s what some of the readers on GeekWire were saying. … It helps find buyers.

TB: Are these services adding value to the overall process of buying a home, or are they siphoning off and keeping the agents from doing their jobs?

Lisota: I don’t think they’re siphoning off. Clearly these sites are wildly popular with consumers, whether it’s Zillow or Trulia and some of these other sites. There’s no getting around that, and none of these brokers, no matter how much money they spend, they’re not going to create a site that’s going to compete with those. It fundamentally boils down to old-school ways of thinking, old-school agents who are just being territorial with their data. They used to be the gatekeepers of that information. They wish they still were. They feel that they’ve kind of let these companies have that traffic, and they have, because most of them are just not capable of developing a compelling consumer website.

Lisota: The market is a little bit odd right now. Particularly in some of the in-close neighborhoods in Seattle or some of the in-close neighborhoods on the Eastside, the inventory of homes for sale is very low. The quantity of buyers isn’t that high, but when the inventory of homes is so low, you face competition, or you face the fact that there’s nothing out there to buy. A lot of sellers have given up for a little bit. They’ve said, I know the price of my house has come down, I’m just going to sit and wait. And when you get enough people sitting and waiting the inventory comes down. So we’re actually struggling right now with people being able to find houses in some of the Seattle neighborhoods.

JC: Is that leading to price increases at all?

Lisota: I won’t say it’s leading to price increases yet. If we have a sustained period of low inventories like that, that is what will eventually happen.

Listen to the full show below or directly via this MP3 file.

GeekWire airs at 7 a.m. Saturdays and 1 p.m. Sundays on 97.3 KIRO-FM, featuring a new guest every week, plus our tech news roundup, App of the Week and Name that Tech Tune contest.