Our guest on the latest GeekWire radio show and podcast was Stefan Weitz  from Microsoft Bing. He gave us a broad update on the latest developments from the Microsoft search team — including Bing’s newly launched angel investment fund, the company’s partnership with Yahoo and its competition with Google.

Weitz talked about the integration of social data into Bing’s search results pages, a recent approach that leverages Microsoft’s partnership with Facebook. Bing continued the social push today with the announcement that public tips from Foursquare users will be incorporated into the Bing social sidebar when people search for locations.

And yes, he insisted, some people actually do use the word Bing as a verb.

If you missed the show, or just prefer text, here are highlights from his conversation with GeekWire’s Todd Bishop and John Cook:

You are involved with Microsoft Bing in a variety of different ways.  I’m curious, for the people who have not been familiar with Bing over the past year or two, what’s changed?

Weitz: The biggest thing that’s changed with Bing is everything.  Over the past year we looked over the search product we had and said, “Gosh, it’s getting its winter clothes on.  It’s gotten a little bit chunky, doesn’t look quite right.  Let’s get back to our fighting weight.  Let’s go ahead and get our summer look going here.”

We cleaned up the whole results page so it’s a beautiful new look and feel.  It’s very clean and very fast.  We then added in something that we call the Task Pane or Snapshot, which is this really cool way to get things done using search.  That is a whole new area for us.  We then added in this whole other thing called the sidebar which is pulling in all your friends from Facebook and across other social services to help you complete tasks and get stuff done using your friends as part of your queries.

How much actual usage are you seeing of that particular feature?  Generally, what you do is search for something, like movie times, and then you see, in the sidebar of the search results page, any of your friends who might have liked that movie and you can interact with them from that sidebar.  Are you seeing people actually doing that?  It seems like you have those examples but I wonder how much that is actually getting used in day-to-day life.

Weitz: I’d have to go look at the actual numbers of how often it fires or how often it appears but I know it’s double digits, which is great.  And then it depends on the example.  Sometimes there are situations where you have no friends or you have very few friends with very little online activity.  You’re going to get less and less things in that pane in those examples. We are seeing, as more people “like” things and do things on the web, Facebook, and other services, that pane gradually increasing in coverage.

So one report that came out this week on the Bing numbers as they relate to Google, I think Comscore had the report, put Bing right around 15%.  It doesn’t seem like Bing has been able to make a big dent in the Google lead.  What is the plan to erode that lead?  Are you happy at 15%?  Where do you want to get to?

Weitz: We’re not happy at 15%.  So, a couple things.  The first thing is, it’s not necessarily a zero sum game.  People always assume for us to win, Google has to lose and I think a lot of what we’re doing now inside of Bing is saying, “How do we expand the art of the possible?  How do we actually make people understand that search can do more than it does today?” For those types of queries, we think we can do better, we think we are doing better.  It’s almost as though we want to grow the pie and then take a good chunk of that pie for ourselves because our engine will be a lot better.  Also, if you look at the fact that we power Yahoo as well, we’re actually closer to the 26% or so of search queries and almost 30% of all search ads being served there.  So we’re getting critical mass for advertisers, which is great, and one third of the country that is searching is hitting our backend. 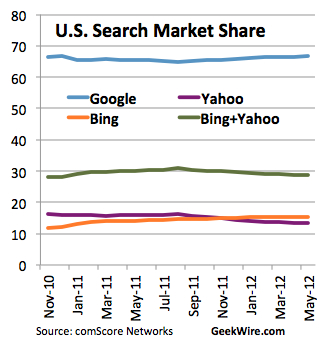 Lately, the Yahoo numbers have been in decline … what is the state of that whole Yahoo relationship with Microsoft Bing?

Weitz: It’s very important to us because it does give us that advertiser scale.  It allows us to actually serve those ads, which means a better marketplace for advertisers, it means high quality ads for the users. It’s a very important partnership for us.  15% or so of folks are still using Yahoo search as well, so the combination of these two engines provides a really good second-place contender for search. We want to get to first, obviously.

It’s been interesting to see how Bing has spread throughout different Microsoft products as well, being embedded into things like Windows Phone and Xbox.  I’m curious when you think long term, how are you going to define search over the next few years and how can people expect things to change in terms of how they look for information or access information through a search engine?

Search of tomorrow will not be a keyword URL mapping service as we have today.  Search is really going to be ubiquitous and threaded throughout all these different systems and services.  It’s not just going to be this field that you type something into. (That will still be a big chunk of it obviously).  For example, if you look at the Windows phone and go to the maps app and hit the Local Scout button, it’ll actually d0 a bunch of local queries on your behalf.  It’ll show you where to eat, attractions, where to go in that area, all based on your location.  Those are a bunch of queries that you didn’t explicitly do but we did on your behalf and brokered that information back to you.

You mentioned earlier … the use of the phrase “I’m going to Bing that.” Have you actually ever heard someone outside of Microsoft say that?

Weitz: I have!  You know who else has?  Danny Sullivan who is a big search watcher and is the editor of Search Engine Land.  He said he knew that Bing had a good chance when his neighbor, who is an older guy, was talking about searching and actually said “I’ll go Bing that.”  Danny Sullivan called me and said, “You’re not going to believe what just happened!”

One of the things that Bing has done to compete with Google is do some unusual marketing stuff.  One of them was the Stephen Colbert campaign.  Stefan, why don’t you explain what that was for people who missed it.

Weitz: If I recall correctly, we contributed $2,500 per time he said Bing to his disaster relief fund.  He then went on an absolute Bingathon and said it like 50 times in the course of a couple minutes.

Are you guys in a better position than other Microsoft divisions to do some cutting-edge stuff and what are your favorite things that you guys have done?

GeekWire airson 97.3 KIRO-FM in Seattle at 7 a.m. every Saturday, and 8 a.m. and 2 p.m. every Sunday. The show runs every weekend on GeekWire.com. You can get every episode using this RSS feed, or by subscribing in iTunes or Zune.

Listen this weekend for another new show.

Weitz:  When we first launched Bing, when you asked people how consciously you think about your choice of search engine when going to search, it ranked between tapping your leg when bored in a meeting and deciding whether to brush your teeth at night.  People just have the habit of Google and some cases Yahoo.  We had to do something to break through into the consideration set for doing a search.  We’ve done a lot of unorthodox marketing, like the Bingathon or going to product placement inside very popular TV shows.  It is about becoming something in people’s minds that is an option to use when going to do a search.

Todd: Just this past week you did something unique as Microsoft Bing called the Bing Fund. Basically an investment fund that is going to be putting money into startups and encouraging them to use Bing interfaces and build some of their applications around Bing. John, I’m curious just to start, were you surprised by this?

John: I was because Microsoft has historically never wanted to take equity investments in startups and this seems to be really counter to that idea.  I really want to get Stefan’s opinion on why the change of course?

Weitz: Just to be clear, we’re not necessarily making equity investments.  We will write a convertible note (basically money that can convert into equity at some point in time) but really it’s a small amount.  It’s not a ton of money for startups.  It was really more to say, how can we encourage innovation in the online space.  We’re giving them office space at Microsoft, bringing in experts from across the company to help them with technical problems; we’re opening up API’s for them so they can actually build really cool products.  It’s less about us getting a return on the investment and more about giving these folks some bootstrap money to make sure they can get to critical mass.  It’s a rolling program and we’re targeting about ten teams in this first section.  We won’t have to have ten to start; we actually have one we’re going to announce here pretty soon.

What sort of innovations would you hope to get out of that?

Weitz:  This project is being headed up by Rahul Sood, the former founder of Voodoo PC which was sold to HP many years ago.  He’s a serial entrepreneur with 20 some years of experience doing this.  He’s actually really open, saying it could be anything.  We were looking at different proposals coming in and there was one that was about helping people optimize their ads more effectively if you’re a small business.  That might not sound super sexy but it’s a huge area and a huge pain point for a lot of small businesses out there to understand how their online presence is manifesting.  The idea is really to create some disruptive innovation in the space and we think by co-locating a bunch of people together, getting them access to cool interfaces, and giving them access to really fun people who’ve written a lot of the stuff, we think they can generate some good ideas.

Listen to the show below or directly via this MP3 file. The conversation with Weitz starts at 12:30, after our news roundup.

GeekWire airs on 97.3 KIRO-FM in Seattle at 7 a.m. every Saturday, and 8 a.m. and 2 p.m. every Sunday. The show runs every weekend on GeekWire.com.  Also access the podcast archive on GeekWire.