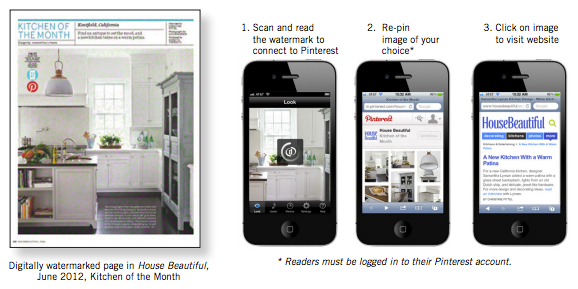 The new issue of House Beautiful, hitting store shelves today, is being billed as the first Pinterest-enabled print magazine — allowing readers to scan the first page of the “Kitchen of the Month” feature with a smartphone app to connect to a Pinterest pinboard preloaded with pictures that they can share on the growing social network.

It uses technology from Digimarc Corp., the Beaverton, Ore.-based company that specializes in digital watermarking. The company, which developed its digital watermarking technology to prevent bank notes from being counterfeited, is aiming to expand further into the print publishing sector by providing an alternative to QR Codes and Microsoft Tags for magazines.

One advantage over those alternatives is that the Digimarc watermark is imperceptible to the human eye — making it popular among magazine publishers wary of disrupting their design with a visible code.

“Our technology is a way to provide those same kinds of digital interactive experiences though print without marring the visual aesthetics of the magazine,” explains Ed Knudson, Digimarc executive vice president.

The pixels of the image are manipulated slightly, creating a signal that a smartphone camera can detect when used in conjunction with a special app developed by Digimarc for iPhone or Android. House Beautiful also offers its own version of the scanning app for iPhone.

In the case of House Beautiful, after readers scan the page with the app, they’re taken to the magazine’s Kitchen of the Month pinboard on Pinterest, with an expanded gallery of high-quality images that they can re-pin to their own pinboards. Images then link back to the House Beautiful website, creating a viral loop for the magazine.

You can also try it out online: This PDF of the page is scannable from a computer screen.

Digimarc has been making headway with a number of magazines, using the watermarking technology to link readers to a variety of content online. Among other publications, the company also worked with Sports Illustrated to watermark this year’s swimsuit issue, linking to sponsored videos of the models’ photo shoots.