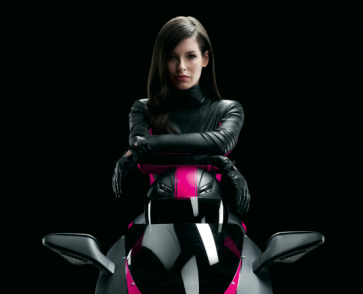 Carly is giving up her pink dresses for leather gear and a motorcycle.

T-Mobile USA is rolling out a new ad campaign that attempts to change the public perception of the company, as symbolized by the new wardrobe for its spokesmodel. The motto for the campaign: “No More Mr. Nice Girl.”

In a new set of commercials set to begin airing this week, Carly is shown going through her closet, discarding magenta dress after magenta dress before landing upon a black leather motorcycle suit, with magenta trim. She then heads out on the town on a motorcycle, signifying the network’s speed and technological savvy.

T-Mobile executive Peter DeLuca tells AllThingsD that the commercials are part of the buildup to a “refresh” of the T-Mobile brand this year. We’ve asked T-Mobile for more details on that broader plan.

After the company’s acquisition by AT&T fell through, T-Mobile has been taking the approach of a scrappy underdog with its “challenger” strategy, looking to beat its rivals in areas including price. The company’s big challenge remains its status as the only major carrier without the iPhone.

See more coverage of the new campaign on TmoNews.

Update: Here’s a teaser video released by T-Mobile this afternoon.