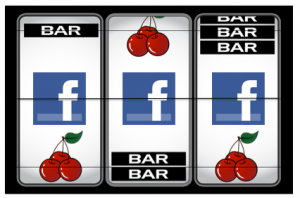 Every once in awhile the matrix reboots itself. When Facebook makes its initial public offering this week, there will be an estimated 1,000 newly minted millionaires from the employee ranks.

It’s hard for me not to reflect back 20 years ago to the heady days of Microsoft’s rise, resulting in a reported 1,200 people at the company reaching ‘millionaire’ status overnight. We were all in our 20’s, and the company garage seemed to fill instantaneously with exotic sports cars with expensive ski racks.

And then, almost 10 years after that, I found myself in a ‘deja-vu’ at Google after they bought my startup company just a few years after their own IPO. Newspaper articles in the halls of Google cited stories of my colleagues buying homes in Lake Tahoe, and/or participating in philanthropy.  There were vast cultural differences between how the two companies’ workforces handled their newfound wealth (Microsoft celebrated it, while Google frowned upon constant stock price checking), but in both cases the miracle happened en masse, and overnight.

Many managed to hold on to their money. Many others didn’t. For some, stock wealth launched entrepreneurship and philanthropy. For others, materialism and conspicuous consumption. It was a lottery ticket, plain and simple. And statistically, 90% of all lottery ticket winners go broke after 3 years. And while people seldom talk about money in our culture, avoiding the topic makes history repeat itself, and stigmatizes issues around money.

Thus, I offer some very candid advice for my younger colleagues at Facebook, who are about to have a life-changing event.

1.  Take 10% of your earnings, and immediately get some sh*t out of your system.

It’s OK. Play a little. If you’ve been driving around in a crappy car since sophomore year of college and you want to upgrade your ride, do it. If you’ve been buying from the sale rack of Old Navy and now want to own a Prada tux, go for it. Celebrate a little. Just put a limit on it. There’s some interesting psychology around bracketing your excesses, vs. the dangers of leaving them open-ended when money seems endless. For some of us, 10% was a good rule but this is, of course, very personal. Don’t be the guy with 75% of his new earnings tied up in cars, boats, and condos in Vail.

If you don’t want to do any of those things, more power to you.

Regardless of how you fill your own materialism tank, create some new value. There’s been a lot of buzz recently amongst local Seattle entrepreneurs about pledging to put 5% of their last exit’s money into new startups. I applaud this movement with great enthusiasm, and would encourage folks to do more than 5%.

Facebook millionaires, I challenge you to do 10% or 20%. Heck spend some of it up here in Seattle! Now is an amazing time in the world to do startups and catalyze new innovation. It’s never been faster and easier to reach real customers and achieve scale. The forward national outlook on business conditions simply looks great. Win or fail, you are enabling someone else’s dream. They don’t use the term ‘angel’ for nothing.

Make at least one person in your life not have to worry about how they’re going to live. When my startup Phatbits was bought by Google in 2005, one of the coolest moments was when co-founder/CTO Geoff decided to pay off his mom and dad’s mortgage. His mom actually burst out in tears. Awesome.

4.  Beware of things being out of scale, and defer big ticket items until later. 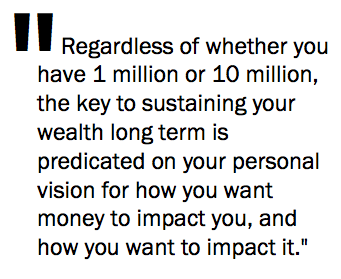 You’re 26 years old, do you really need Italian marble in your kitchen? And if you just gotta, then please don’t talk about it like you quarried the marble yourself. Money and the things that it buys ultimately create distance between you and others. No one in polite company will say this to your face, but secretly they are measuring you based on your ability to deal with your new wealth. It’s just a little weird for others to hear that on Friday, you’re headed out to Hawaii on your own jet to do a little surfing.

The city of Seattle is littered with stories from realtors, lawyers, and small business owners who found the kind of excess in this town during the 90’s off-putting. (To be clear, I’m talking about a few people, not the majority).  In your 20’s, there’s so much greater life value to lessening barriers vs. erecting them. You’ll have to work hard to ensure that others still find you accessible and ‘down to earth’.  This means, to some extent, having the same problems as everyone else.

Plus, as a practical matter, your tastes will change as you get older. Don’t be stuck with the expensive Italian marble that you thought was so cool 10 years ago when your new wife/husband moves in.

5. For god’s sake diversify, and I don’t mean buy a big house.

Technology people know technology, but it’s highly important to take a significant portion of your new earnings and diversity it out of tech.

There’s a myth perpetuated in this country that your house is your biggest and most important investment. I think it’s a bit of a circular reference because that fact may be the byproduct of most people not having access to other asset classes, and thus their house is their biggest investment by default. As a new high-net-worth individual, you’ve short-circuited this gloriously. Any good investment professional within a square mile radius of 1601 Willow Road will help you to find the right allocation of assets that will balance hedging risk and growth, without the social implications of ‘the big house.’ 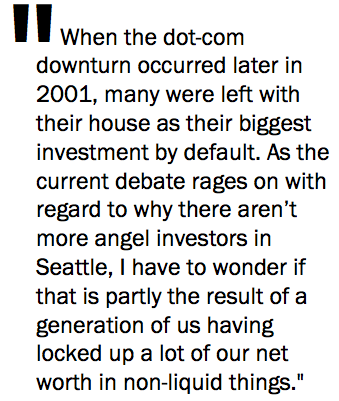 The years during Microsoft’s stock growth coincided with (and caused) a surge in real estate values in the Seattle area.  It was like the same 500 or 600 people were chasing after the same few good neighborhoods to live in.  Multiple bidding wars were common in the hottest neighborhoods and consequently it was not uncommon to find colleagues who ponied up big to get the house they were expected to live in, spending a significant portion of their newfound wealth to do so. When the dot-com downturn occurred later in 2001, many were left with their house as their biggest investment by default.

As the current debate rages on with regard to why there aren’t more angel investors in Seattle, I have to wonder if that is partly the result of a generation of us having locked up a lot of our net worth in non-liquid things.

Bay Area demographics and real estate dynamics are similar, and it’s my hope that the Facebook generation follows a different path. Buy a cool mid-century Eichler in Menlo Park. Buff it out and make it cool. Leave Atherton’s mansions for the old folks, and put the money you saved into your favorite causes (or see #2 above).

6. It’s your relationship with money that counts, not the amount of money.

Probably the most unfathomable notion to a young, newly minted millionaire is that someday the money will run out.  Believe me, there is no shortage of ways that your money can quickly be spent — from initial taxes, to family members in need, retirement allocation, unforseen illness, etc. But regardless of whether you have 1 million or 10 million, the key to sustaining your wealth long-term is predicated on your personal vision for how you want money to impact you, and how you want to impact it.  For instance:

At the end of the day, these are high-class problems to have. As a 45-year-old looking back, I am a little envious of you Facebook kids.  It’s going to be a wild ride for you guys, the likes of which the world really hasn’t seen. I wish you success, balance, and ultimately happiness with your future accomplishments and impact you will have on the world.  Your 30’s and 40’s will come upon you faster than you think (especially given your famous all-night hackathons and lock-downs), so I’ll leave you with a quote from one of my favorite 80’s teen movies.

“Life moves pretty fast. If you don’t stop and look around once in a while, you could miss it.” – Ferris Bueller

Top image: GeekWire illustration based on photo via BigStock.