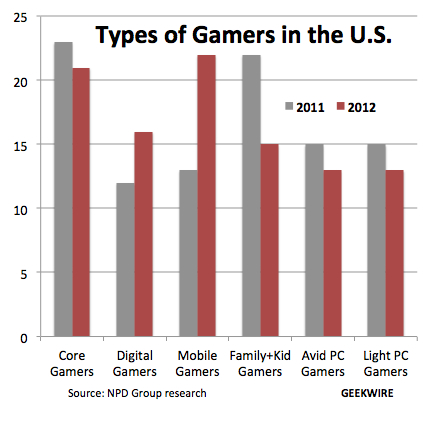 It’s no secret that the rise of the iPhone, Android and other mobile devices have shifted the attention of gamers away from traditional game consoles in the living room. But the mobile gaming phenomenon just reached a notable milestone in the United States.

Numbers out today from the NPD Group research firm show that people identified primarily as mobile gamers represent an estimated 22 percent of the U.S. gaming population, an increase of 9 percentage points from a year earlier.

That was slightly larger than the population of “core gamers,” a.k.a. heavy users of game consoles such as the Xbox 360 and PlayStation 3. That category that slipped 2 percentage points to 21 percent over the past year.

Part of the reason is that the current consoles are going on 6 and 7 years old at this point.

“Given the long lifecycles of the current consoles and the increasing installed base of smartphones and tablets, it’s not surprising to see a slight decline in the Core Gamer segment,” said NPD analyst Anita Frazier in a news release on the study results. “It’s the revenue contribution of the Core Gamer segment that continues to outpace all other segments, and remains vital to the future of the industry.”

At the same time, she added, “looking across the total gaming audience we see a tremendous impact from mobile gaming, particularly on smartphones and tablets.”

Not everyone who stops playing a game console is shifting to a mobile device. The overall gaming population has declined by about 5 percent in the U.S., to an estimated 211.5 million gamers, according to the NPD research.

For context in understanding the chart above, here are the definitions NPD uses for each category of gamer.

Core Gamers: Very engaged across all systems, especially consoles. Higher use of Xbox 360 and PS3 than all other segments. Most time spent gaming overall (15 hrs/wk). High likelihood to acquire/purchase games. While digital game purchasing is average, most likely to purchase microtransactions/ additional content.

Digital Gamers: Engaged in a variety of gaming, from PC to mobile, console to portable, online and offline. Their focus is on digital acquisition. Heaviest game acquirers of all segments. Also highest number of digital games and apps acquired. More so than others, they like the immediate access that digital provides.

Mobile Gamers: Segment is defined mainly by use of mobile devices (phones and other) for gaming. Particular emphasis on i-devices. Time spent gaming on mobile devices is almost half of total gaming time. Highest percentage of Free Digital games though paid digital acquisition is on par with the average gamer.

Family + Kid: Segment with a high incidence of “kid system” use – e.g., Leapfrog Leapster, etc. Both game acquisition and number of games personally purchased are below average and $’s spent on digital games is lower than total gamers.

Light PC Gamers: Also focused on PC gaming, but not nearly to the extent as Avid PC Gamers. Their primary, and for the most part only, genre preference is casual games (card, puzzle, word, etc.) The vast majority prefer free games. Low purchase likelihood overall, regardless of content type.