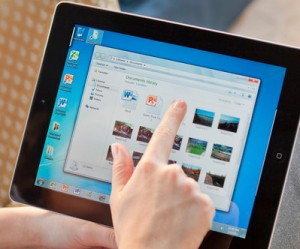 OnLive has turned heads this year with its OnLive Desktop app for running Microsoft Windows on the iPad and Android tablets, serving up a virtual Windows desktop — plus Microsoft Office — from a cloud-based service.

But in a carefully worded blog post today, Microsoft made it clear that it doesn’t believe the OnLive service complies with its licensing terms, at least not as it’s currently offered.

Microsoft requires the end customer to have a licensing agreement for hosted Windows 7. Its licensing terms also require Windows Server and Microsoft Remote Desktop Services to be used to deliver Office as a service.

“We are actively engaged with OnLive with the hope of bringing them into a properly licensed scenario, and we are committed to seeing this issue is resolved,” writes Microsoft licensing executive Joe Matz in the blog post.

Microsoft’s post also points to a recent Gartner reportraising questions about the licensing for the OnLive service. The report said, “Organizations and end users should note that OnLive Desktop Plus may present Microsoft licensing risks for organizations if consumers install the product on company iPads or use it to edit company documents from personal devices. Neither Microsoft nor OnLive has provided clear guidance on how users of these DaaS products must comply with Microsoft licensing requirements.”

An OnLive spokesman says, “We have never commented on any licensing agreements.”