Reaching a goal it established three years ago, Microsoft says it has reduced its carbon emissions as a proportion of its revenue by 30 percent, compared with 2007 levels.

“I’m pleased to report that we’ve met this goal through a combination of energy efficiency measures and an investment in high-quality externally verified renewable energy and carbon reduction projects,” says Rob Bernard, Microsoft’s chief environmental strategist, in a pre-Earth Day blog post. “Next week, I will be going to Washington DC where Microsoft will receive recognition from the Environmental Protection Agency for our commitment to renewable energy.”

But a new report from Greenpeace this morning presses Microsoft, Amazon and Apple to use more renewable energy to run their data centers, saying they “are all rapidly expanding without adequate regard to source of electricity, and rely heavily on dirty energy to power their clouds.”

On the other hand, the report says, “Yahoo and Google both continue to lead the sector in prioritizing access to renewable energy in their cloud expansion, and both have become more active in supporting policies to drive greater renewable energy investment.”

Facebook also gets high marks for commiting to renewable energy sources, starting with the construction of a new data center in Sweden that can be powered fully by renewable energy.

See the corporate scorecard from the Greenpeace report below. 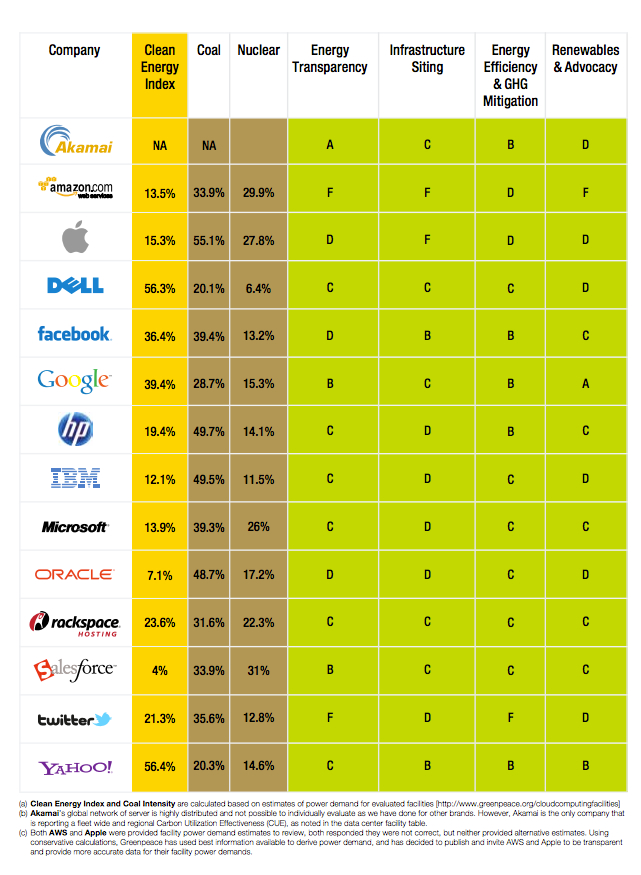