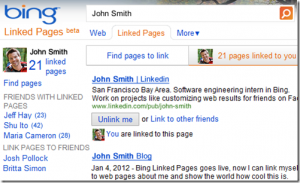 The feature lets users authenticate themselves using their Facebook credentials, and then determine which pages and sites their profiles are linked to in Bing search results.

The idea is to give people more control over how they’re viewed online, while making results more relevant to people conducting searches.

Users can also link their Facebook friends to pages and sites in a similar way, although those friends will need to approve the links before they go live.

It’s another example of Microsoft taking advantage of Facebook integration to differentiate its search engine, which remains a distant second to Google in market share. Microsoft is a minority investor in the dominate social network.

Google has largely been going it alone in these areas, with its Google Profiles and Google+ social network.