Puzzle technology startup Puzzazz is giving Amazon’s Kindle Touch a capability that even Amazon didn’t envision — letting users input numbers and letters by writing them naturally with a finger on the screen, rather than tapping at the e-reader’s tiny on-screen keyboard. 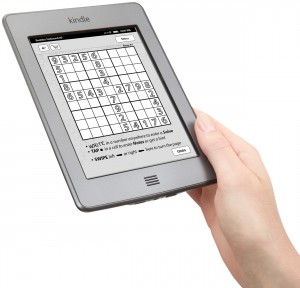 The new TouchWrite technology, developed internally by Puzzazz, recognizes those invisible scribbles and converts them into visible numbers and letters on screen. The technology makes its debut today in the startup’s newest puzzle e-book, Sudoku Unbound Volume 3.

Unlike some handwriting-recognition from years past, the TouchWrite technology doesn’t require users to learn any special way of writing, and it recognizes many different styles of writing different numbers and letters. Puzzazz founder Roy Leban says the company used extensive handwriting samples in the process of developing the technology.

It’s the latest effort by the Seattle-area startup to improve the experience of using e-books, through its lineup of digital puzzle books.

“We think what we’re doing here is the future of books,” Leban said.

What about expanding TouchWrite across the Kindle Touch, by getting Amazon to make it a basic feature of the device? Leban declined to comment when asked about that possibility.

As a start, Puzzazz plans to incorporate TouchWrite into all of its future puzzle e-books. The same books will still work on other Kindles, making use of their physical and on-screen keyboards, but the Kindle Touch is the only Kindle that supports the TouchWrite technology.

I got a chance to try TouchWrite this week, and it worked reliably. In the Sudoku book, the technology recognizes the number written invisibly on the screen, then places the digital version in the corresponding cell on the page of the puzzle book.

The technology offers the option of writing a large number across the screen. In those case, it places the digital version of the number in the cell where the finger started. Alternatively, it’s possible to write smaller and center the character over the cell where you want the number to appear.

Sudoku Unbound Volume 3 for Kindle sells for $2.99, the same price as other puzzle books in the same series from Puzzazz.