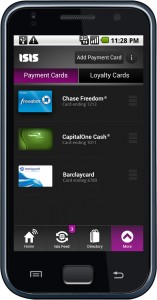 Almost lost amid the flood of new devices announced at Mobile World Congress in Barcelona overnight was a notable sign of progress toward the tech industry’s longtime aspiration of replacing old-fashioned wallets with digital ones.

Isis, a joint venture of AT&T Mobility, T-Mobile USA and Verizon Wireless, says it has reached agreements with Chase, Capital One and Barclaycard to put their credit, debit and prepaid cards into a digital wallet for mobile phones — a secure app that will let people use their devices rather than plastic to pay for items at stores.

The joint venture also provided the first public glimpse of the Isis interface. The app works via Near-Field Communication technology, or NFC, letting users tap their phones to pay at the register.

Isis is planning to test the Mobile Wallet later this year starting in Salt Lake City and Austin.

Sprint, the only one of the four major U.S. wireless carriers not involved in the joint venture, is working separately with Google on its alternative Google Wallet initiative.

Isis, based in New York, also has an office in Bellevue.