As journalists and participants in the Pacific Northwest tech community, we’ve long believed that Seattle deserves a world-class tech conference that involves people not only from our region but also from other tech hubs such as Silicon Valley and Boston — bringing leaders together for a conversation about the future of technology and innovation in the Northwest and beyond.

Today we’re announcing our first steps toward that vision, and we’d like to invite you to join us.

GeekWire will be presenting a half-day conference, the inaugural GeekWire Summit, in downtown Seattle the afternoon of March 7. 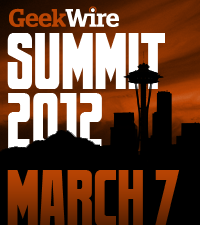 The lineup of speakers so far includes technology pioneer Ray Ozzie, the veteran entrepreneur and former Microsoft chief software architect; Hulu chief technology officer Richard Tom, the executive responsible for all aspects of the online media company’s tech infrastructure; and Oren Etzioni, the computer scientist and serial entrepreneur from the University of Washington.

Ed Lazowska, the longtime UW computer science professor and sage observer of the tech industry, will also be joining us as a moderator of one of the GeekWire Summit panels.

We’re excited to have these veteran technologists joining us, and we’ll be announcing more in the weeks ahead.

Our goal with the GeekWire Summit is to give attendees insights into future tech trends — the stuff that actually matters — plus an inside look at how successful tech companies are built from the ground up, straight from the people responsible for building them. We’ll be engaging our speakers in lively, fireside chat discussions, and inviting the audience to participate in the conversation.

And if the date March 7 sounds familiar, that’s because it’s GeekWire’s one-year anniversary. The conference will conclude with a big after-party to celebrate the occasion.

The event will be held at the Conference Center across the street from the Washington State Convention & Trade Center. More details and tickets are available here, with special rates for developers and early bird pricing through Feb. 16.

We’re looking forward to seeing everyone on March 7 as we start a new tradition for GeekWire and the tech community. Thanks, as always, for your participation and support.