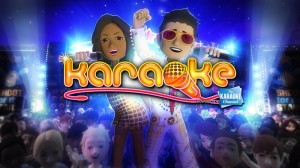 It’s Friday night and you have a bunch of people at the house after a concert. The musical vibes are still goin’ and people are antsy to get some karaoke in. You could head over to the local dive bar, but the place isn’t your favorite and the commute sucks.

Enter The Karaoke Channel on Xbox Live. It’s essentially a virtual karaoke machine, right down to the database of 8,000 tracks to the hourly rates.

Microsoft Studios announced a partnership today with The Karaoke Channel the produce a Karaoke app that will require people to purchase “blocks” of usage time. Users can belt out their favorite tracks for two, six and 24-hour allotments. Xbox has not released pricing specifics yet.

“We thought by-the-hour pricing made good sense because we wanted to make the product easy to access, something to turn on when you wanted it, and enjoy with friends and family when it matters like parties and holiday gatherings,” says David Dennis, Xbox product manager.

This is the first time Microsoft has monetized a game this way. It’s another move from Xbox into the free-to-play market, coming after last month’s release of Happy Wars, the first free-to-play game on Xbox.

“We are always looking at ways to push the boundaries of the console and our digital platform,” says Dennis. “Bringing true free-to-play gaming experiences to Xbox 360 is a natural extension of that.”

Xbox SmartGlass technology will be supported on the Karaoke app and users can pick songs from their tablet or smartphone using SmartGlass. The songs will be hosted on the cloud and streamed to the console, so you don’t have to worry about taking up memory with the latest Justin Bieber track.

“As the owner of the world’s largest licensed karaoke library and karaoke service on TV and Internet, the KARAOKE Channel will combine its expertise with the advanced capabilities of the Xbox 360 platform from Microsoft to develop the best in-home karaoke experience ever,” Eric Boyko, President and CEO of Stingray Digital Group Inc., said in a statement. “Now anyone can access our vast library and sing in a fun and interactive way right from their Xbox.”

Sony and Nintendo have similar games. PlayStation has SingStar, which charges per song, and Nintendo’s Wii Karaoke U is pre-installed on the new Wii U consoles sold in Japan and has a similar pay-as-you-sing pricing structure as Xbox.

Editor’s note: This story was updated on Nov. 20 at 3 p.m. with quotes from Microsoft