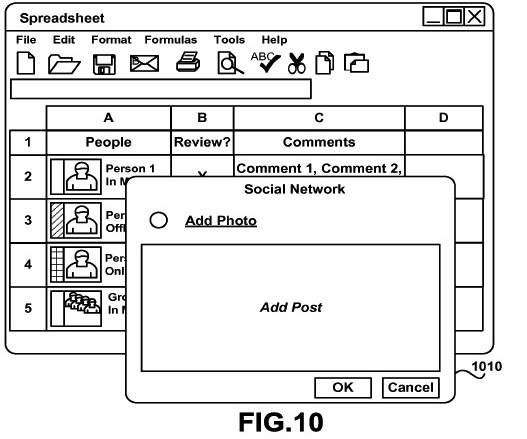 Last year, a Facebook application called HardlyWork.in made news by providing an alternative interface for the social network — putting a user’s Facebook news feed inside a fake Excel spreadsheet, aiming to make it easier for desk jockeys to discreetly check and post to Facebook while appearing to work.

Turns out Microsoft has been thinking along the same lines, exploring the possibility of posting to Facebook and other social networks as a feature of real Excel spreadsheets.

A newly surfaced patent application from Microsoft, made public July 26, outlines different ways of representing people inside spreadsheets, with a variety of data about those people, and various forms of interacting with them. The patent application explains …

Microsoft has already been moving to incorporate some social networking features into the traditional Office programs, and the company’s recent acquisition of Yammer for $1.2 billion promises to make this happen even faster.

As with most of these patent applications, there’s no indication about when or even whether Microsoft would build social networking directly into Excel cells.

For the record, even though it was made public only recently, the company’s patent application was originally filed in January 2011, about six months before HardlyWork.in debuted.