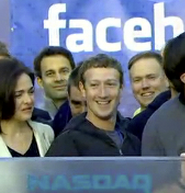 One of the interesting parts of Facebook’s Wall Street debut was the fact that the social network was initially considered more valuable than industry veteran Amazon.com. But no more.

Facebook shares fell nearly 11 percent today on the company’s second day of trading, despite broader gains in the stock market. The decline of $4.20, to $34.03, puts Facebook’s market value around $93 billion, compared to more than $100 billion based on the initial pricing of its shares.

Amazon by comparison has a market value of more than $98 billion.

The decline for Facebook comes amid questions about the social network’s ability to generate enough advertising revenue to justify its lofty valuation, despite a user base that now numbers more than 900 million people — “the largest community in the history of the world,” as Facebook CEO Mark Zuckerberg puts it.

See this weekend’s GeekWire podcast for more discussion of Facebook’s long-term prospects with Nat Burgess of Corum Group, a mergers-and-acquisitions specialist who is skeptical about the company’s ability to adequately monetize its user base.