Editor’s Note: Yoky Matsuoka, the former University of Washington computer science professor, is one of the subjects of the new book, “Mastery,” by Robert Greene, set for publication this week. This excerpt is reprinted with permission from Viking Press.

In order to learn a subject or skill, particularly one that is complex, we must immerse ourselves in many details, techniques, and procedures that are standard for solving problems. If we are not careful, however, we become locked into seeing every problem in the same way, using the same techniques and strategies that became so imprinted in us. In examining the life of Yoky Matsuoka, the revolutionary neurobotics pioneer, we see this truth come to life.

Yoky always had the feeling that she was different from others. It wasn’t so much how she dressed or looked, but her interests that set her apart. As a teenager in Japan in the early 1980s, she was expected to focus on a particular subject that she would transform into a career. But as she got older, her interests only widened. She had a love for physics and mathematics, but was attracted to biology and physiology as well. She was also a talented athlete with a future as a professional tennis player, until an injury cut this short. On top of it all, she loved working with her hands and tinkering with machines.

Much to her relief, when she began her undergraduate studies at the University of California at Berkeley, she fell upon a subject that seemed to open up all sorts of larger questions that would satisfy her voracious, wide-ranging interests— the relatively new field of robotics. After completing her undergraduate studies, curious to explore this subject further, she entered the masters program in robotics at MIT. As part of her work in the department, she was to help in the design of the large-scale robot they were building, and soon she chose to work exclusively on the design of the robot’s hands. She had always been fascinated by the complexity and power of the human hand, and with the chance to combine so many of her interests (mathematics, physiology, and building things), it seemed she had finally found her niche. 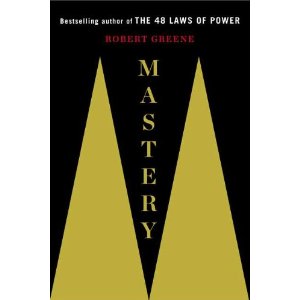 As she began her work on the hands, however, she realized yet again how different she was in her way of thinking. The other students in the department were mostly men, and they tended to reduce everything to questions of engineering— how to pack the robot with as many mechanical options as possible so it could move and act in reasonably human ways. They thought of their robot as intrinsically a machine. To build it meant solving a series of technical issues and creating a kind of moving computer that could mimic some basic thought patterns.

Matsuoka had a much different approach. She wanted to create something as lifelike and anatomically correct as possible. That was the real future of robotics, and to reach such a goal meant engaging in questions that were on a much higher level— what makes anything alive and organically complex? To her, it was as important to study evolution, human physiology, and neuroscience as it was to immerse oneself in engineering. Perhaps it would complicate her career path, but she would follow her own inclinations and see where they led.

In going about her design, Matsuoka made a key decision: she would begin by building a model of a robotic hand that would replicate the human hand as closely as possible. In attempting such an enormous task, she would be forced to truly understand how each part functioned. For instance, in trying to recreate all of the various bones of the hand, she came upon all kinds of seemingly irrelevant bumps and grooves. The bone at the knuckle of the index finger has a bump that makes it larger on one side. In studying this one detail, she discovered its function— giving us the ability to grasp objects in the center of the hand with more power. It seemed odd that such a bump would evolve expressly for that purpose. Probably it was some mutation that ended up becoming a part of our evolution, as the hand became increasingly important in our development.

Continuing in this line she worked on the palm of her robotic hand, which she had determined was in many ways the key to the design. For most engineers, robotic hands were designed for optimal power and maneuverability. They would build in all kinds of mechanical options, but to make it work they would have to pack all of the motors and cables in the most convenient place, the palm, rendering it completely rigid. After designing hands like this, they would then fob them off to software engineers to try to figure out to how bring back maneuverability. Because of the built-in rigidity, however, the thumb would never be able to touch the pinky, and engineers would inevitably end up with the same highly limited robotic hand.

Matsuoka started from the other end. Her goal was to discover what makes the hand dexterous, and it was clear that one critical requisite was to have a flexible, curved palm. Thinking on this higher level, it then became clear that the motors and cables had to be placed somewhere else. Instead of jamming the hand with motors everywhere so that everything could move, she determined that the most important maneuverable part of the hand was the thumb, the key to our grasping skills. That is where she would put more power.

She continued on this path, uncovering more and more of the details that went into the marvelous mechanics of the human hand. As she worked in this peculiar way, other engineers would scoff at her and her strange biological approach. What a waste of time, they would tell her. In the end, however, what she called her anatomically correct testbed hand soon became the model for the industry, revealing whole new possibilities for prosthetic hands, vindicating her approach, and gaining her fame and recognition for her engineering skills. 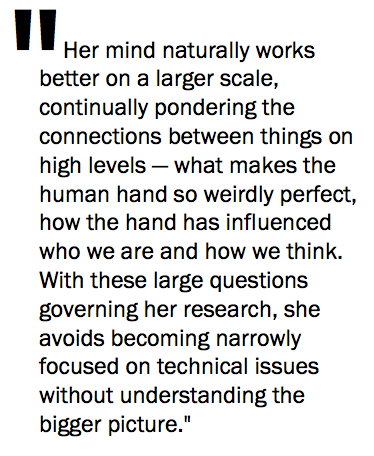 This, however, was only the beginning of her quest to get at the organic nature of the hand and to literally recreate it. After graduating with a master’s degree in robotics, she returned to MIT to pursue a PhD in neuroscience. Currently, armed with deep knowledge about the neurosignals that make the hand-brain connection so unique, she is pursuing the goal of creating a prosthetic hand that can actually connect to the brain, operating and feeling as if it were real.

In many fields we can see and diagnose the same mental disease, which we shall call technical lock. In solving problems with a standard route, we become locked into solving problems in the ingrained, standard route, which is always simpler. In the process we lose sight of the bigger picture, the purpose of what we are doing, how each problem we face is different and requires a different approach. We adopt a kind of tunnel vision. This technical lock afflicts people in all fields as they lose a sense of the overall purpose of their work, of the larger question at hand, of what impels them to do their work in the first place.

Yoky Matsuoka hit upon a solution to this that propelled her to the forefront of her field. It came as a reaction against the engineering approach that prevailed in robotics. Her mind naturally works better on a larger scale, continually pondering the connections between things on high levels— what makes the human hand so weirdly perfect, how the hand has influenced who we are and how we think. With these large questions governing her research, she avoids becoming narrowly focused on technical issues without understanding the bigger picture. Thinking on such a high level frees the mind up to investigate from all different angles: Why are the bones of the hand this way? What makes the palm so malleable? How does the sense of touch influence our thinking in general? It allows her to go deeply into the details without losing a sense of the why.

You must make this a model for your own work as well. Your project or the problem you are solving should always be connected to something larger— a bigger question, an overarching idea, an inspiring goal. Whenever your work begins to feel stale, you must return to the larger purpose and goal that impelled you in the first place. This bigger idea governs your smaller paths of investigation, and opens up many more such paths for you to look into. By constantly reminding yourself of your purpose, you will prevent yourself from fetishizing certain techniques or from becoming overly obsessed with trivial details. In this way you will play into the natural strengths of the human brain, which wants to look for connections on higher and higher levels.

Robert Greene is the author of the New York Times bestsellers The 48 Laws of Power, The Art of Seduction, The 33 Strategies of War, and The 50th Law. His new book, Mastery, will be published tomorrow.