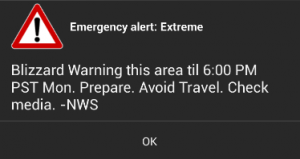 When the National Weather Service issued a blizzard warning for the Cascades on Sunday afternoon, a lot of Seattle-area smartphone owners received an alert that was long on drama and short on details.

The alerts came in various shapes and forms but were confusing to people who looked out the window and saw rain and temperatures in the 40s.

Both T-Mobile and Verizon customers reported receiving the alert, part of a system that began going live nationally in June.

In Facebook and Twitter discussions, no Seattle-area AT&T or Sprint customer has reported receiving an alert. The AT&T customer service technician I talked to about 5:30 pm Sunday said, “we are still working with FCC … we don’t have a specific release date yet.”

This is what the alert (it’s not a text message) said:

This is how it could have been written to be helpful:

These alerts are part of a national emergency communications program, the Commercial Mobile Alert System, which is managed by the Federal Communications Commission:

[C]ustomers who own an enabled mobile device [will] receive geographically-targeted, text-like messages alerting them of imminent threats to safety in their area… CMAS was established pursuant to the Warning, Alert and Response Network (WARN) Act.

CMAS alerts are transmitted using a new technology that is separate and different from voice calls and SMS text messages. This new technology ensures that emergency alerts will not get stuck in highly congested user areas, which can happen with standard mobile voice and texting services (emphasis added).

Reportedly, you can configure your smartphone so that it will not deliver weather or amber alerts but you cannot disable the Presidential alerts.

In October, MacWorld reported that iPhone5/iOS6 customers are a mixed bag:

“Some users also get new settings in the Notifications screen—at the bottom, grouped under Government Alerts—for enabling or disabling AMBER Alerts and Emergency Alerts. In our testing in the San Francisco Bay Area, Sprint and Verizon users see these settings, while AT&T users do not. However, the availability of these settings also appear to depend on your location: Responses to an informal poll of Twitter users indicate that Verizon users in some parts of the country get the settings, but those in other locations do not.”

To find out what’s up with your carrier, follow these links:

Until the alerts have more useful contextual information, my recommendation is to turn them off. Download an app (free or paid) that will provide you with a contextual alert.

Screen capture from Eric Butler via Twitter. Post updated to include text of alert and suggested rewrite.