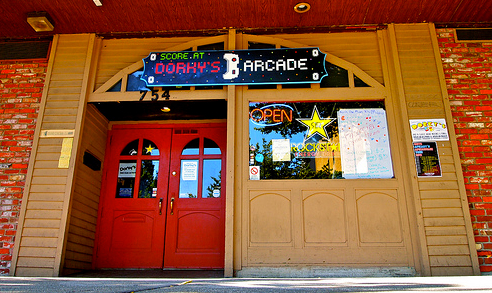 What is the proper role of the arcade in modern society? Should it be a place for boozing adults, or screaming kids? And can it be both?

That is the question raised by the actions of the proprietors of the well-regarded Dorky’s Arcade, in downtown Tacoma, Wash., who have declared on the arcade’s Facebook page that Dorky’s and its banks of 25-cent standup video-games are, effective immediately, off limits to children under 7.

“From now on No kids under 7 years PERIOD!!!!,” reads a Facebook post from Dorky’s, responding to a customer who complained that one of its workers was “a rude rude Bleep” to her group of friends and their kids. “You’re the final straw that got the kids removed completely, THANK YOU.”

The post continued, “We are never rude unless customers do not follow our rules. We have them for a reason and expect everyone to follow them. THIS IS NOT CHUCKY CHEESE!!! It is our business and we are the BEST arcade in WA, Your loss.”

Dorky’s as recently as June 2011 promoted itself as a family friendly place for “kids of all ages.”

Reaction from Dorky’s customers is mixed.

“You know what? Good for you for standing up to them! I work for a small, local business where kids and parents frequent though it’s not specifically for kids and we see ROTTEN CHILDREN come in frequently and terrorize the other customers disrespect the space,” writes one person on Facebook.

“The new rule is unfortunate,” writes another. “Yesterday was the first time that I took my 6 year old daughter there. We had a blast.. I was hoping to bring her in on a regular basis.”

Thanks to Glen Casebeer for the tip.