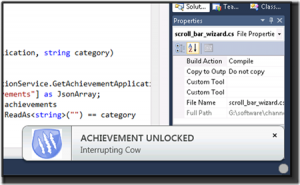 Is there anything that can’t be turned into a game? Apparently not.

Microsoft today embraced the gamification trend by introducing a new plug-in for its Visual Studio development program that will let software developers unlock achievements, receive badges and work their way up a leaderboard based on the code they write.

It might sound a little silly, and it’s definitely not entirely serious — particularly when it comes to the “Just for Fun” achievements such as the “Potty Mouth” award for using five different curse words in a single file.

But there are some practical goals behind it. Apart from shining a light on the work of developers, the achievements are designed to highlight Visual Studio features that many developers might not know about.

There are 32 achievements, including stuff we can all understand like the “Lonely” badge for coding on a Friday or Saturday night or the “Scroll Bar Wizard” badge, for writing a single line of code at least 300 characters long. Then there are achievements that must be funny to developers, such as the “Turtles All The Way Down” badge, for writing a class with ten levels of inheritance, and “Interrupting Cow,” for having 10 breakpoints in a file.

So how does it work? “The Visual Studio Achievements plug-in analyzes a background thread each time code is compiled, as well as listens for particular events and actions from Visual Studio,” explains Karsten Januszewski, software development engineer for Microsoft’s Channel 9 developer site. “When certain criteria or actions are detected, the plug-in triggers a pop-up alert and awards a new badge, which is then displayed on the public leaderboard and the developer’s Channel 9 profile.”

The project was inspired by a post from a Visual Studio user.