The holiday numbers speak for themselves: Amazon is the biggest online shopping site, and it’s not even close.

New website traffic stats from Experian show Amazon with 25.5 million website visits on the day after Christmas, more than three times the amount for second-place WalMart. That number does not even include mobile traffic. 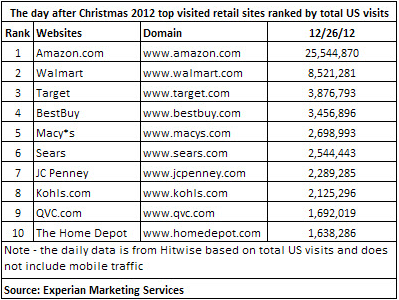 The company also led another key list this week. For the eighth consecutive year, Amazon came out on top in the Holiday E-Retail Satisfaction Index from research firm ForeSee, holding steady with a customer satisfaction score of 88 out of 100.

Amazon isn’t the only online retailer seeing big traffic numbers. Christmas Day 2012 saw a 27 percent increase in online traffic to the top 500 retail sites compared to 2011 and 115.5 million visits in total. Holiday online traffic for the past seven weeks is up 10 percent compared to last year.

Earlier this week, we noted that that actual online spending is up 16 percent so far this holiday season. One of the reasons for the surge was a big uptick in last-minute shopping, propelled by free shipping promotions by online retailers.