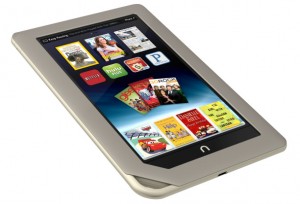 Nate Hoffelder has the scoop over on his Digital Reader blog.

Barnes & Noble’s posting doesn’t explain what “integration” means in this case. We already know that the bookseller is working on a Nook app for Windows 8. Announcing the new Nook HD and HD+ tablets overnight, Barnes & Noble CEO William Lynch told ABC News that the Nook experience for the new Microsoft operating system will launch in two weeks.

But the reference to Windows, Office and Bing seems like a hint, at least, that Barnes & Noble could be working on a Nook tablet powered by Windows 8, as many in the industry suspect. Such a move would further align Microsoft and B&N in competition against Amazon and its Kindle tablet and reader lineup.

Nook devices currently run on Android. Asked by ABC’s Joanna Stern about the possibility of a Nook tablet powered by Windows 8, the B&N CEO gave the obligatory, “We have nothing to announce today” but then added, “Increasingly our company is being viewed for doing some innovative things in hardware and it hasn’t gone unrecognized.”

The job posting is for the position of “Director, Engineering Windows 8.” The description reads, in part, “As the Barnes & Noble leader of the Microsoft Alliance, you will be responsible delivering on our contractual commitments on Windows 8 applications, Cloud, commerce, content integration with the Microsoft ecosystem and for defining and delivering on product strategy of Nook integration with Microsoft ecosystem including Windows, Office, Bing.”

A separate B&N job post for a senior product manager for Windows 8 (also spotted by Hoffelder) is more explicit about that position dealing in Nook software applications for Windows 8 and Windows Phone 8.