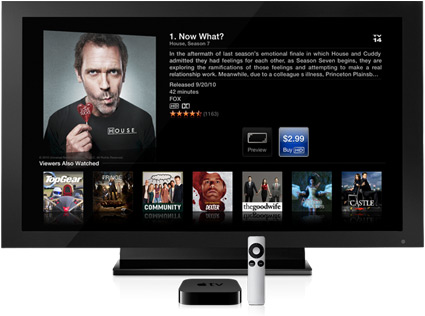 Apple sold 1.3 million Apple TV devices during the June quarter, an increase of 170 percent over the same quarter a year ago.

That still qualifies as a “hobby,” according to Apple CEO Tim Cook, who disclosed the number in response to an analyst’s question on the company’s earnings conference call. But here’s an interesting data point: Microsoft sold 1.1 million Xbox 360s worldwide during the same time period.

Of course, they are different products, targeting different segments of the market. But not entirely. Apple TV and Xbox 360 have more and more in common as Microsoft adds features to its game console to make it more of a general purpose entertainment machine, tapping into a wide variety of online video sources.

The trend also reflects the general decline in the game console market. Microsoft has been leading the PlayStation 3 and Nintendo Wii in the U.S. (and worldwide last year) but Xbox 360 sales have still been declining year-over-year along with the market.

Apple still has a long way to go in the bigger picture. So far this fiscal year (spanning three quarters) the company has sold 4 million Apple TVs, according to Cook. Over the same time period, including the big holiday shopping season, Microsoft has sold more than 10 million Xbox 360.

All told, since launch, Microsoft has sold more than 65 million Xbox 360s.

Speculation about Apple’s plans in the TV market was fueled by comments made by Steve Jobs to his biographer before his death. During the call today, Cook said the company plans to continue investing in Apple TV. He noted that many people in the company believe strongly in the product.

“We do it because we think it will lead us somewhere,” he said.